I'm continuing my writing here by a cozy fire in Vermont, but catching up wise, I'm still back in Acadia National Park.

Thankfully, after a mostly rainy Thursday in Acadia, Friday was sunny and beautiful from the outset, especially when accompanied by a healthy does of steak with our eggs.

We got moving relatively early (for us) and headed over to the Acadia Loop Road. A refresher: the Loop Road is Acadia's main easily accessible attraction. It provides access to most of the short visit highlights of Acadia. If we'd had more time — and less obnoxiously clueless Friday night neighbors — I could have happily spent a few more days at Acadia swimming, hiking, boating, etc.

Not sure that their singing added to the ambience…

From there, we kept driving, taking in the beautiful views — which, I admit, I think got old for the girls fairly quickly. Thankfully, it wasn't very long before we came to the Peregrine Falcon program hosted by the rangers at the Precipice Trail. The rangers had scopes, which allowed us to see the falcons in their nests (sorry, I didn't have a way to take a photo through the scope), and taught the kids (and adults) all sorts of interesting facts about the falcons. Then we were treated to what they believed was one of the juvenile's first practice hunting flights (it mock-attacked a seagull), which had one of the rangers bouncing up and down with excitement. 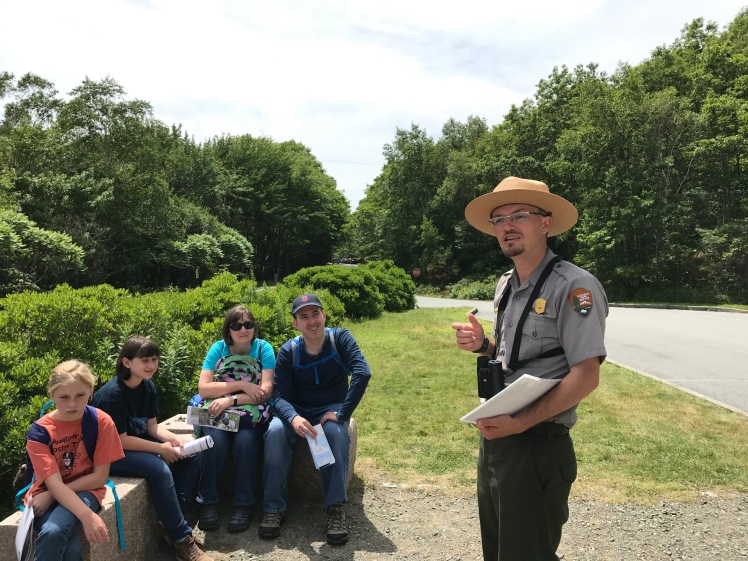 One of the rangers sharing cool peregrine falcon facts. Please, please continue to fund our national parks — they are a treasure for ALL Americans, and we need to make all of the efforts we can as a nation to continue to have some shared experiences — our parks and historic sites can truly help with this.

After visiting the falcons, we made the obligatory stop at Thunder Hole, although we were too closet to high tide, so it was more like "Gurgling Hole." Again, Mike and I have some work to do on not saying "Don't fall" every fifteen seconds, but we're getting there.

Following Thunder Hole, we stopped for a picnic lunch, and then the highlight of the Loop Road, for us, was a stop at the rocky but protected ocean beach at Otter Cove. The girls had a blast and could have stayed there all day. First, they discovered how cold the ocean is up Downeast in Maine. Both girls had a blast seeing how much wildlife they could find in the cove — they found bunches of snails, and then a friendly boy taught them how to find and pick up crabs. The girls were excited to discover that crabs really do walk sideways!

Watching them on the coast, learning and discovering by doing, was, for me, proof positive that our go-with-the-flow approach to using the world to inspire their curiosity is likely to be a successful approach to education this year. Yes, we'll make use of the math books, but these days we carry the world at our fingertips — all we need to do is to find something to inspire us to learn about what's out there: pick up some crabs and then read about crabs, spot some jellyfish in the cold Maine water, and then ask the rangers and poke around online to figure out what that giant purple tinged jellyfish might have been. As Elizabeth said, "The Maine ocean is so much more INTERESTING than the New Jersey ocean." I tried to point out that it's not more interesting, just differently interesting, but Elizabeth didn't quite agree that watching the human "wildlife" at a Jersey shore boardwalk is quite as interesting as exploring tidal life along the Maine shore. 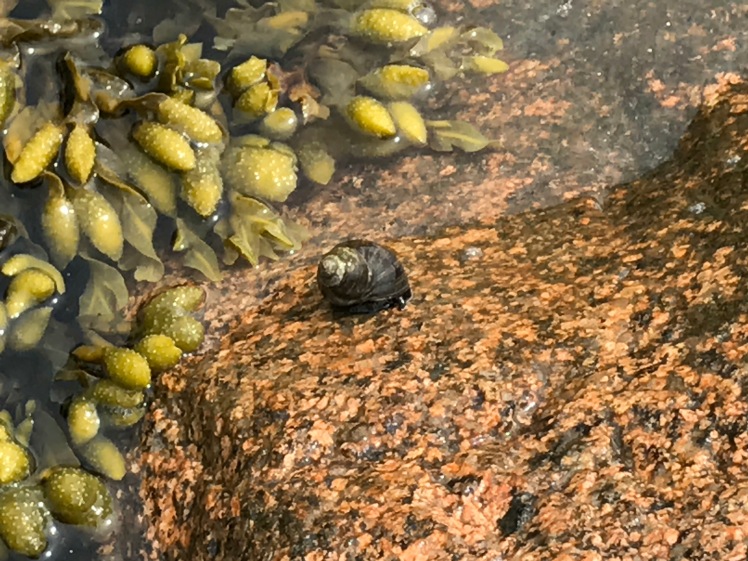 Snail! It took my kids another week before they figured out that they could pick up the snails…

Exploring the tidal nature of the cove.

Getting up close and personal with the ocean. 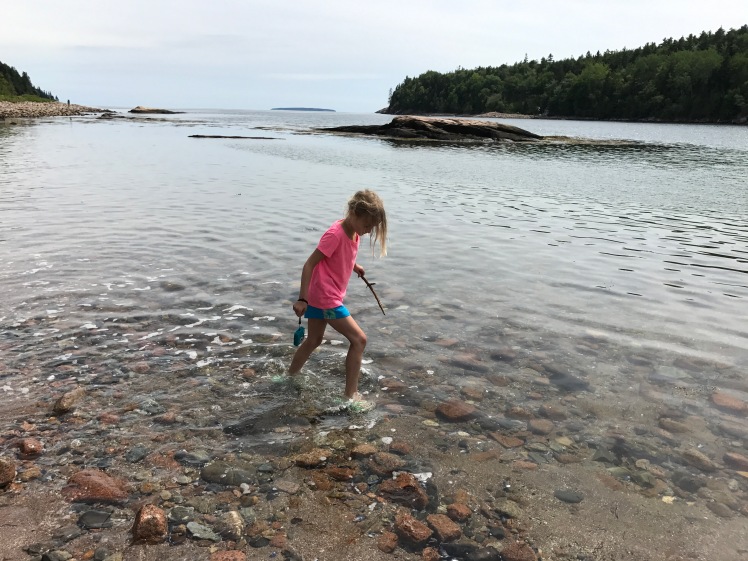 She says she wants to be a marine biologist, but she seemed more interested in intensely checking out the rocks.

A random stranger teaching Elizabeth how to find and pick up crabs. 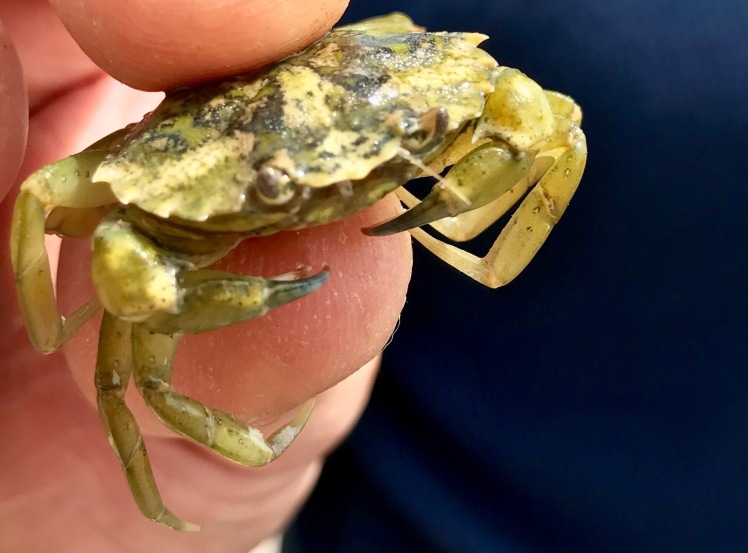 The pink shirt indicates that the little one got in on the crab handling action. We'll see what happens when we get to Maryland and it's time for crab eating!

The crab walk — it's a real thing!

Jelly fish right side up! 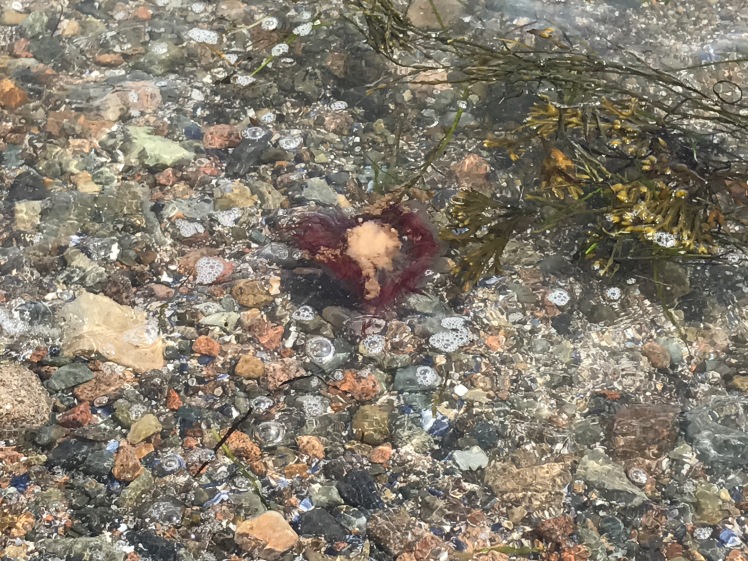 After that, the Loop Road brought us to the interior portion of Acadia, and to a stop I knew I wanted to make at the Jordan Pond House. A million years ago, I remember wanting to try the Jordan Pond House popovers when I spent a few days exploring Acadia with the outing group from my Maine sleep-away camp. We didn't get them, but I got a second chance. So we looked at the pond, giggled at what else the Bubble Mountains resemble, and ate popovers and drank tea on the lawn at Jordan Pond House like civilized folks, not like people who hadn't showered, swam, or bathed in about 48 hours. I grew up on my mom's homemade popovers, but the popovers seemed to be a bit of a revelation to my family. I have a feeling a new recipe might have to enter Mike's repertoire sometime in the near future (and I think if I poke around in my mom's recipe box upon our return, I should be able to find her popover recipe). 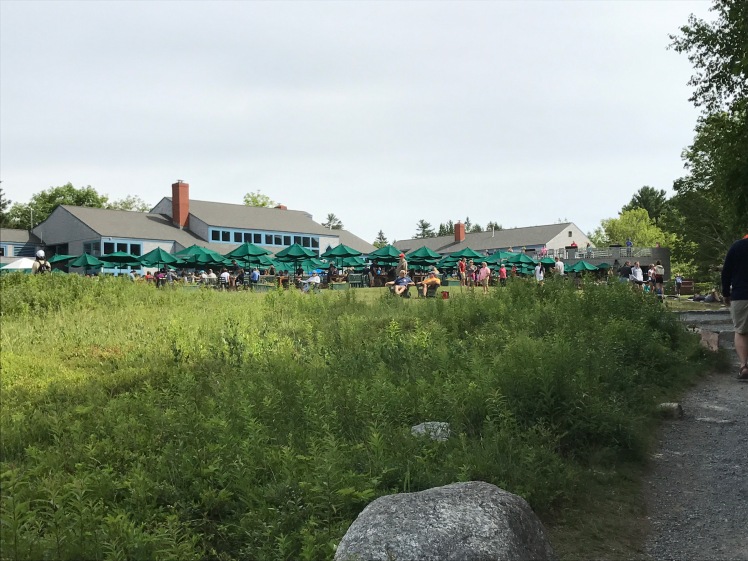 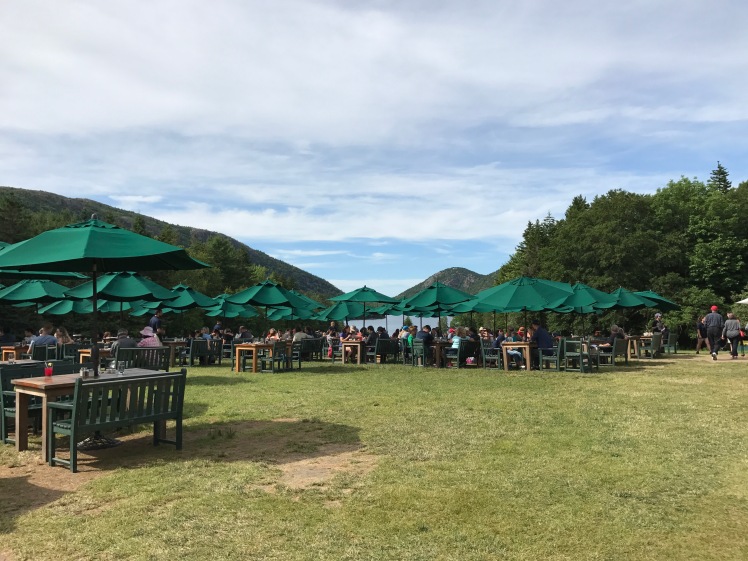 The view from the lawn at Jordan Pond House. 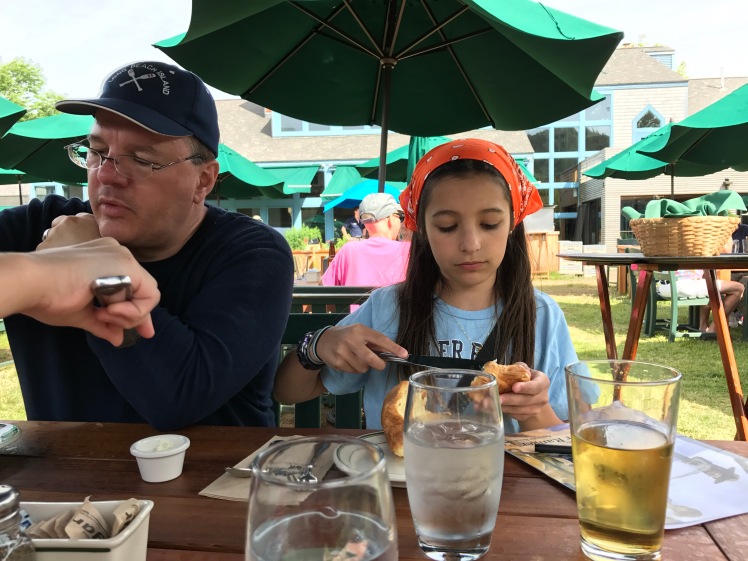 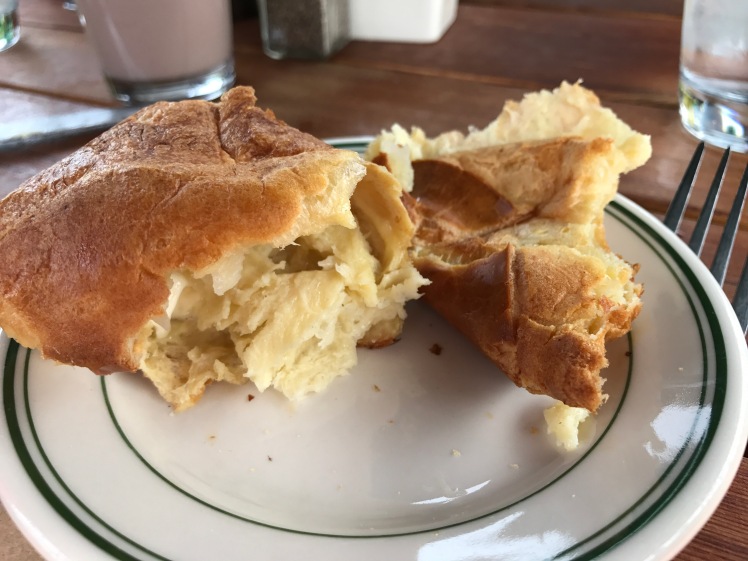 I can still taste it. Yum!

Following Jordan Pond, we swung back to the Visitor Center, where the girls were sworn in as Acadia National Park Junior Rangers. Elizabeth is going to have to start pinning badges to the back of her jean jacket — the front panels are pretty much full-up.

After a full day, we headed back to our campsite for a pasta dinner and then bed after breaking as much of our camp as possible that evening, since the weather was calling for Saturday morning rain, and there's nothing worse than breaking camp in the rain.