Sometimes this trip brings a dose of serendipity. We flew from Melbourne to Singapore, where we stayed in a bizarre little hotel, the Dorset, near the edge of Chinatown. I say bizarre because the room was set up with an upstairs loft — great — but that upstairs loft literally had zero floor space around the king sized bed. So I pulled a little bit of a prima donna fit and made Mike sleep next to the glass wall to the room below so I didn’t have to clamber over him four hundred times in the night. The living area below came complete with a sofa bed, but to our surprise the sofa bed was only a twin bed. Julie — to her credit — selflessly pulled a Harry Potter and slept on the sofa cushions under the stairs for the week. Fortunately, the girls are traveling with full-sized fleece blankets, so Julie was able to make herself a comfy little nest. Other than the weird room, the hotel was pretty decent — it had a nice rooftop pool (although with an occasional slug or two) and we had a lovely afternoon chat with a traveling family from Sydney (they were as bemused by the room design as we were). The hotel was also above an MRT stop, so public transit couldn’t have been easier.

Our first night in Singapore, we ventured out for Chinese food in Chinatown. We ordered Peking Duck and I am still dreaming about it, as the crispy duck skin was one of the most delicious things I’ve ever eaten. Fortunately for Mike and me, the girls are horrified by the idea of eating duck, so we didn’t need to share. More for us! We wandered around a little bit that night but headed back fairly early to settle in to our bizarre sleeping arrangements. 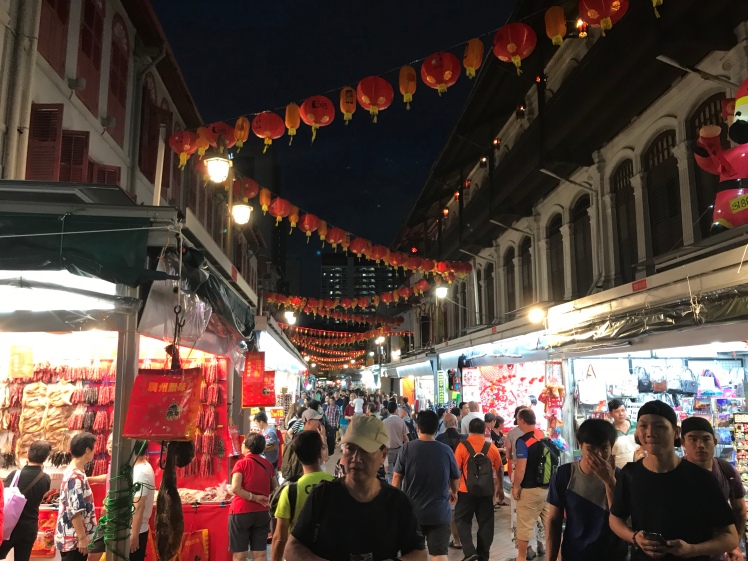 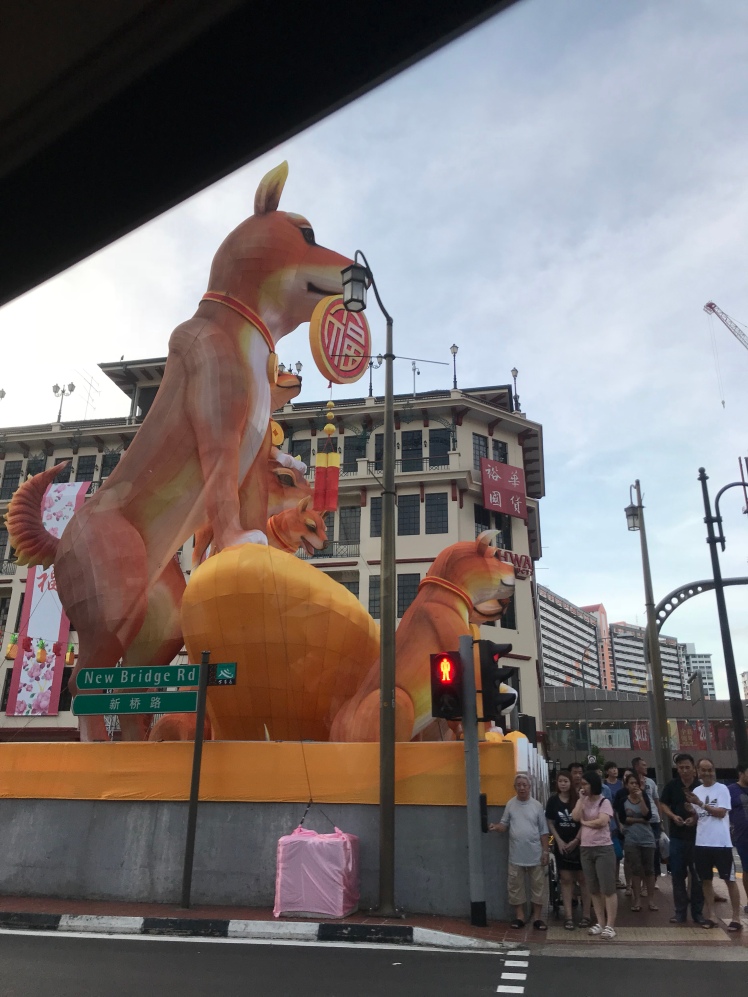 The next day we at a delicious breakfast — oh kava spread, where have you been all of my life? — and then spent most of the day wandering around two huge indoor markets in Chinatown — the People’s Park Center and the People’s Park Food Center, where we found a yarn store and bought some tiny sized crochet hooks and some stuffing for making amigurumi (miniature crocheted stuffed animals). And lucky us — we caught our first whiff of durian. [For those who don’t know, durian is this incredibly popular fruit in Southeast Asia. Its distinguishing characteristic is its putrid smell, which is perhaps most akin to a combination of a ripe restaurant dumpster late on a hot summer day and smelly unwashed socks. More on durian when we get caught up on our Thailand posts.] 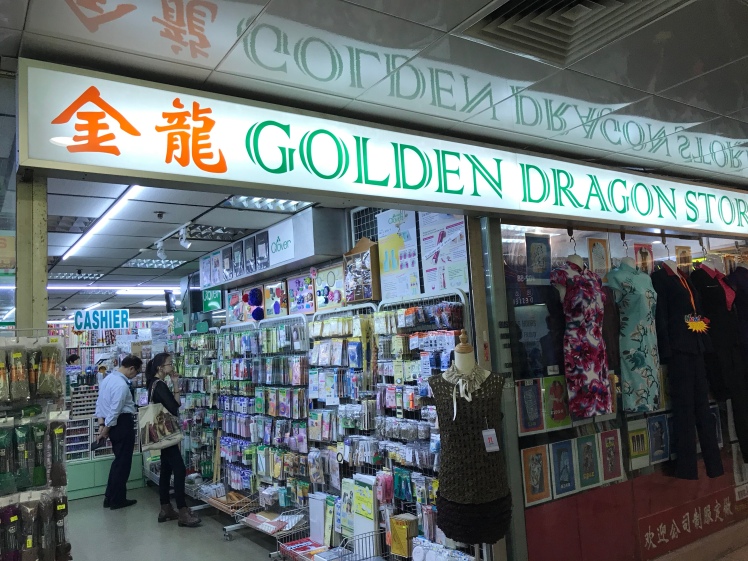 That night, as everyone else was sleeping in our bizarre hotel room, I happened upon a FaceBook post by an old college friend of mine, David. David and I were housemates in the Bayit (Jewish student housing) his senior and my sophomore year, but I hadn’t seen him in person since (for those who don’t feel like doing the math, yes, it had been about 25 years since I’d seen him). Weirdly, David had just posted on FaceBook singing the praises of Singapore. I commented that I agreed about the cleanliness, etc., as I was in Singapore right now. David replied that he was also in Singapore, and we made tentative plans (the rest of my family was asleep) to meet up the next day to do the treetop hike near one of Singapore’s reservoirs.

The next morning my family was willing, and we set off to meet up with my old college friend. His hair was shorter, but he was still genuine, thoughtful, enthusiastic, and kind as can be. I feel so lucky to have reconnected with him in Singapore (ironically back in the US he only lives about 12 miles away from us over in Manhattan). The hike was terrific — we saw lots of wildlife (monkeys, millipedes, and monitor lizards for those who like alliteration) — and even Mike and Julianna successfully managed the treetop bridge above the rainforest with its views out toward one of the reservoirs. It’s a long hike, however, and near the end we got caught in a thunderstorm, so we got a bit drenched as we walked the last kilometer or two toward where we could get a Grab car (a SEA version of Uber or Lyft) back to the city proper. David brought us to an Indian restaurant in Little India, and we had a delicious late lunch of South Indian cuisine. 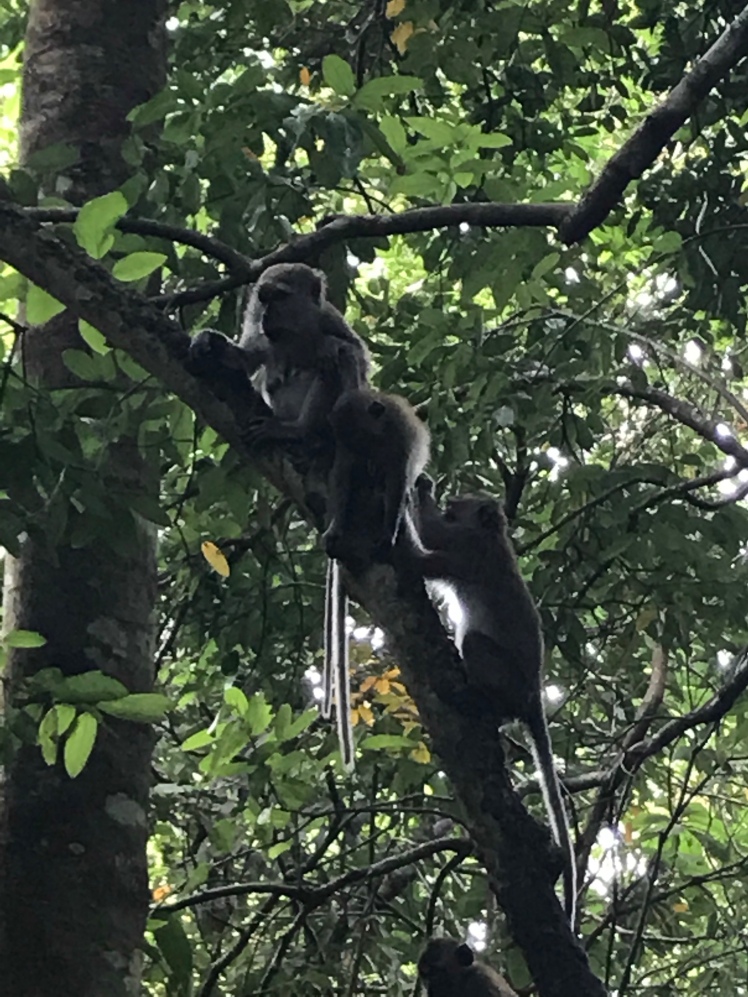 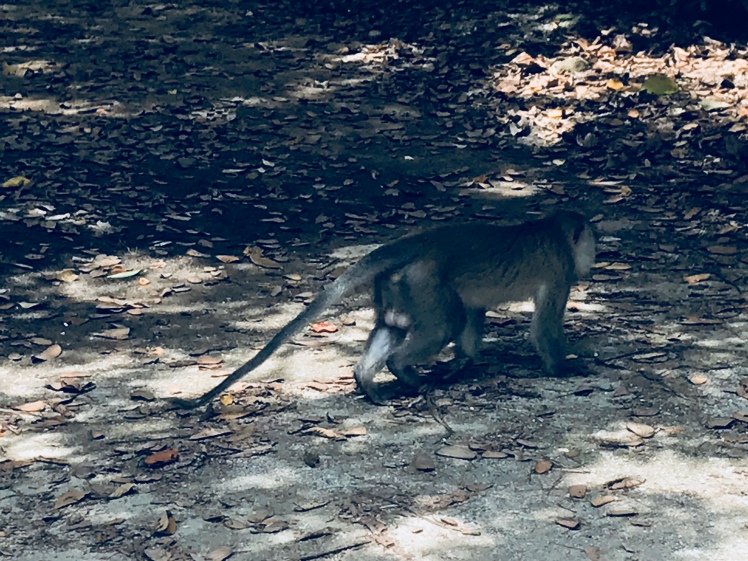 We spent more time with David over the next few days, including wandering through the Cloud Forest and Flower Dome at the Gardens by the Bay with him, and visiting one of Singapore’s museums of Chinese culture. 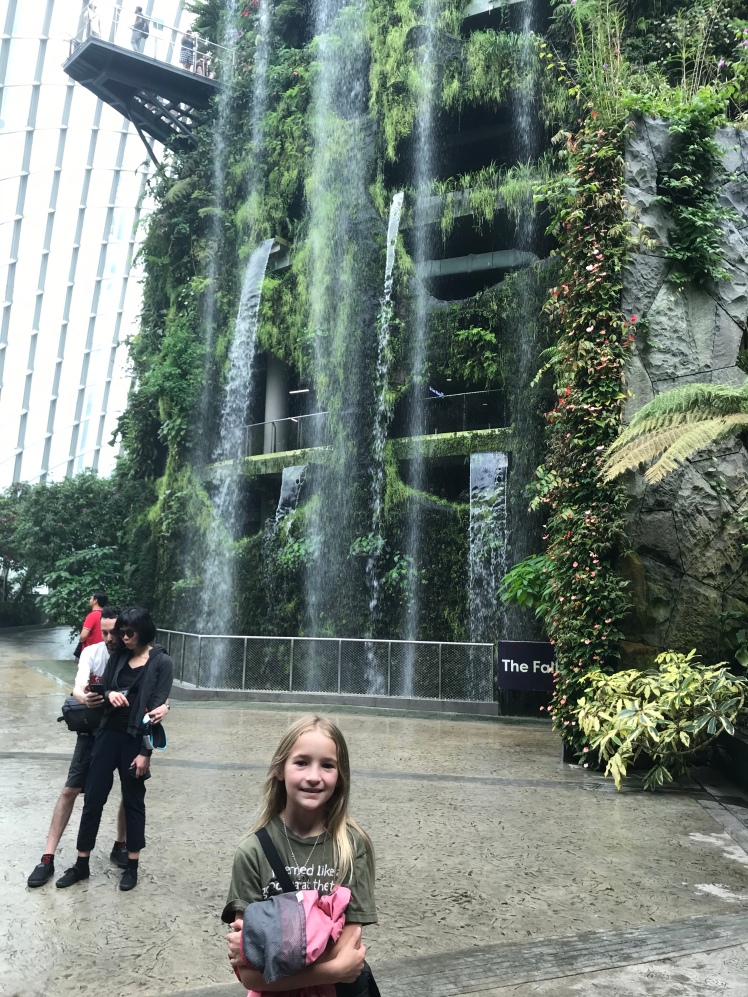 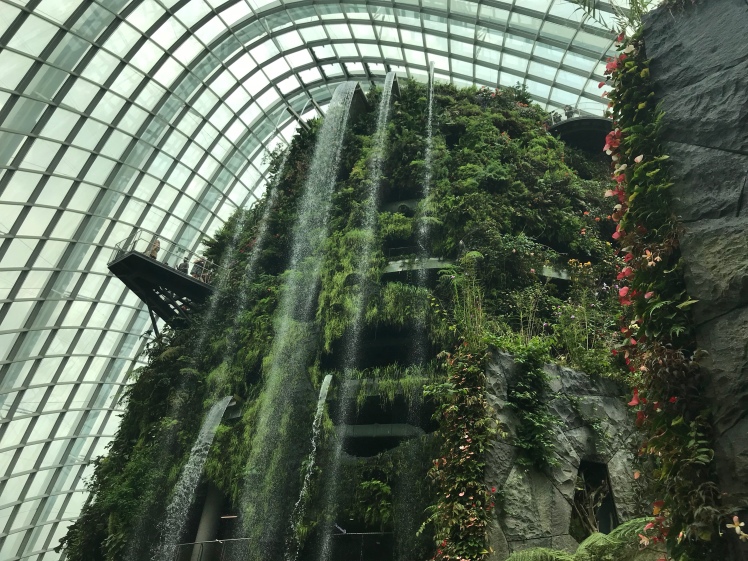 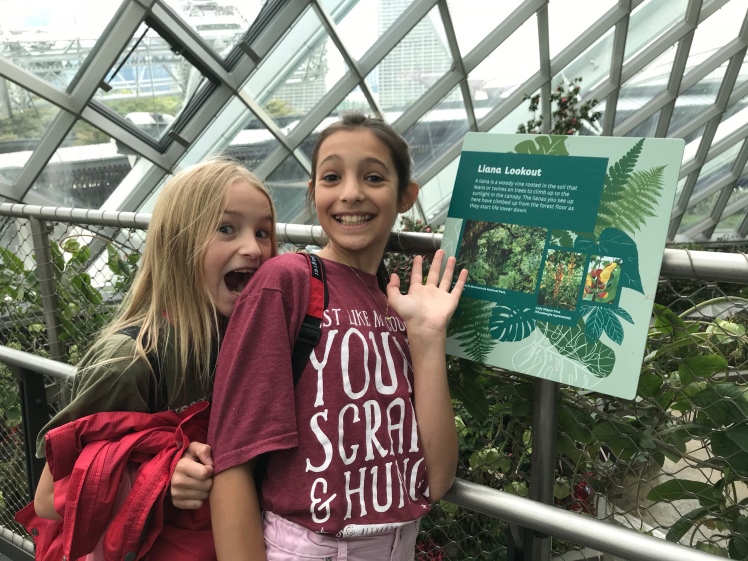 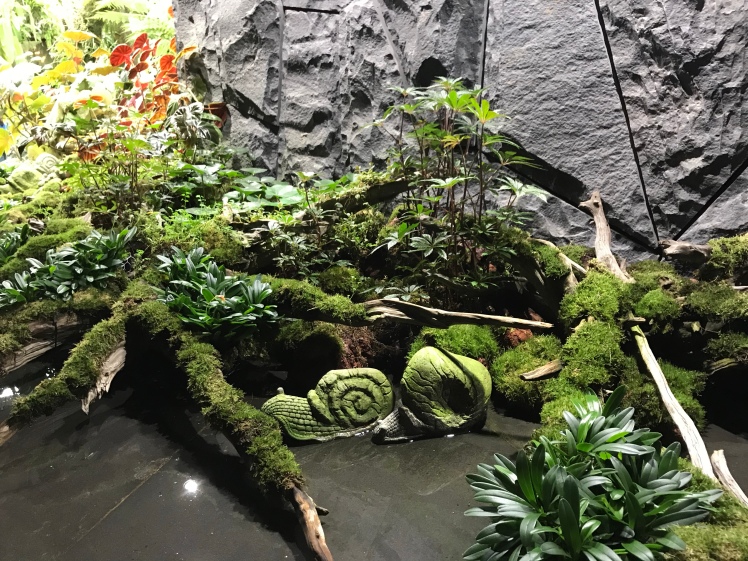 Snapshots from the Cloud Forest Dome. 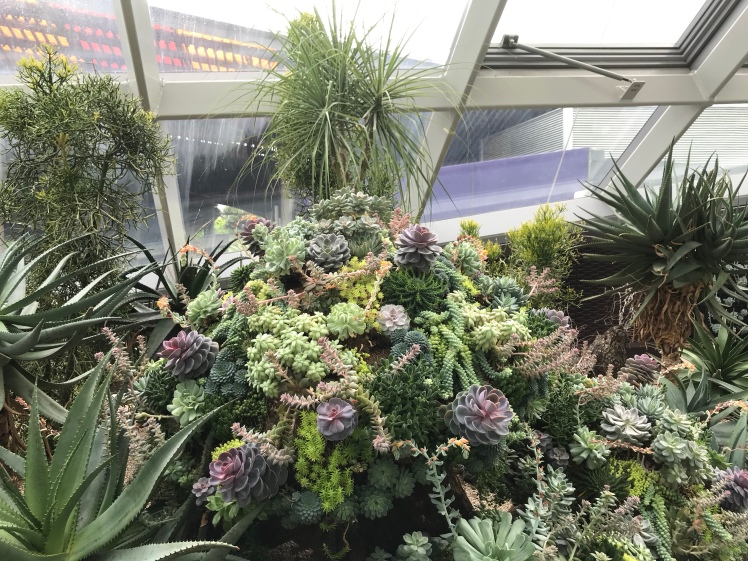 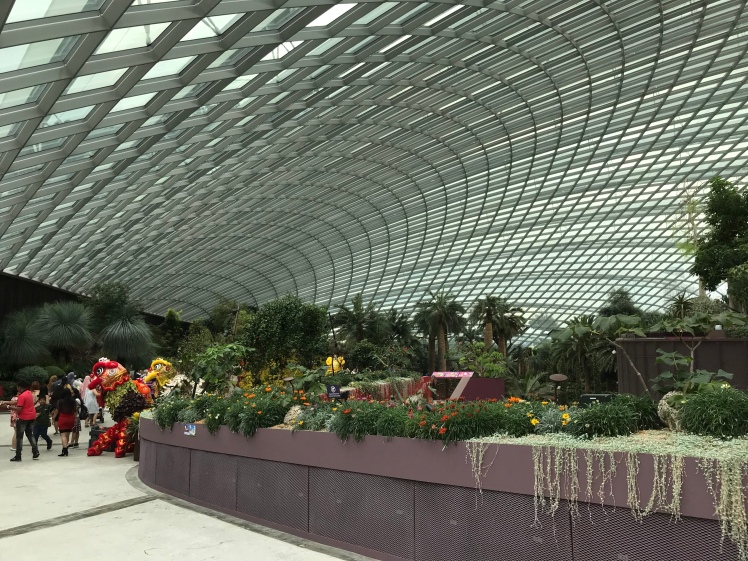 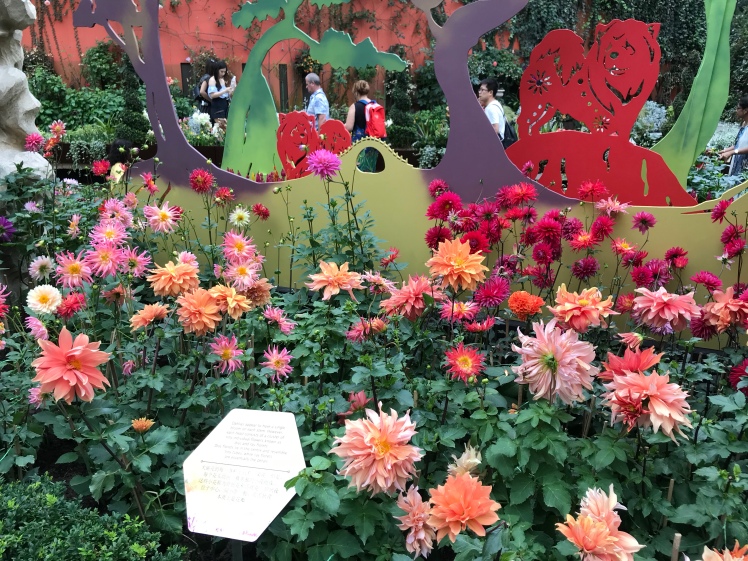 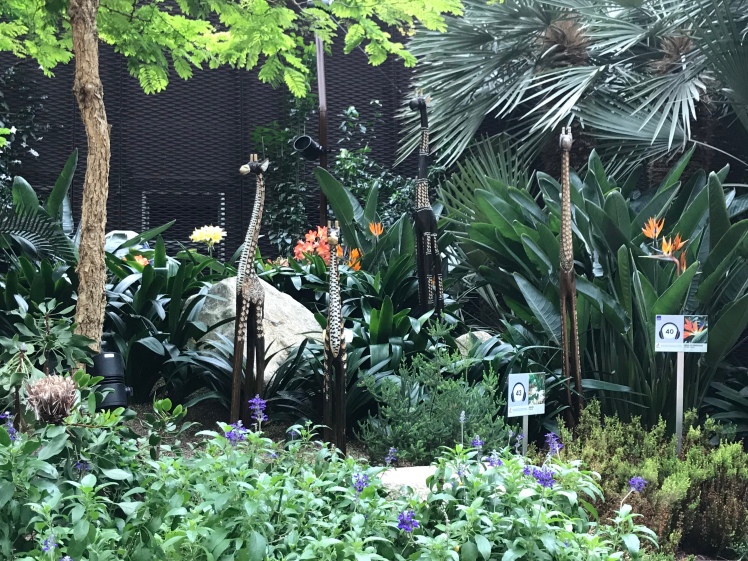 Snapshots from the Flower Dome, where we sat for an hour or more (this time dry inside) waiting for another big thunderstorm to pass. 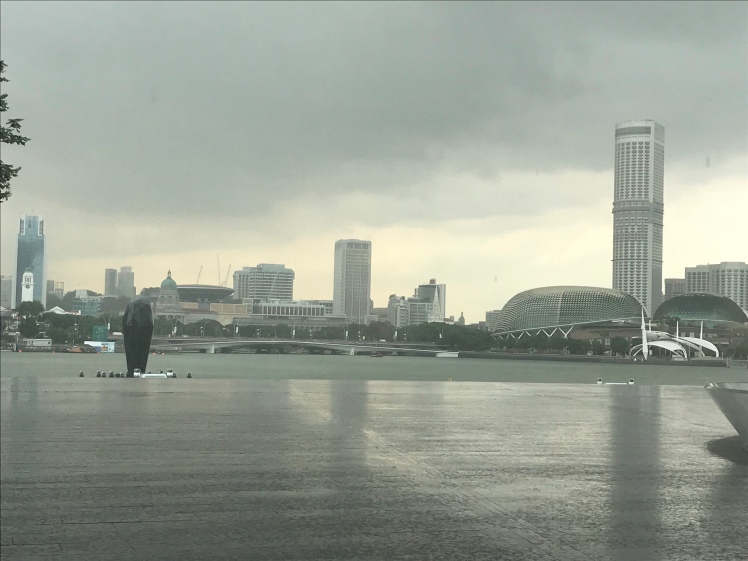 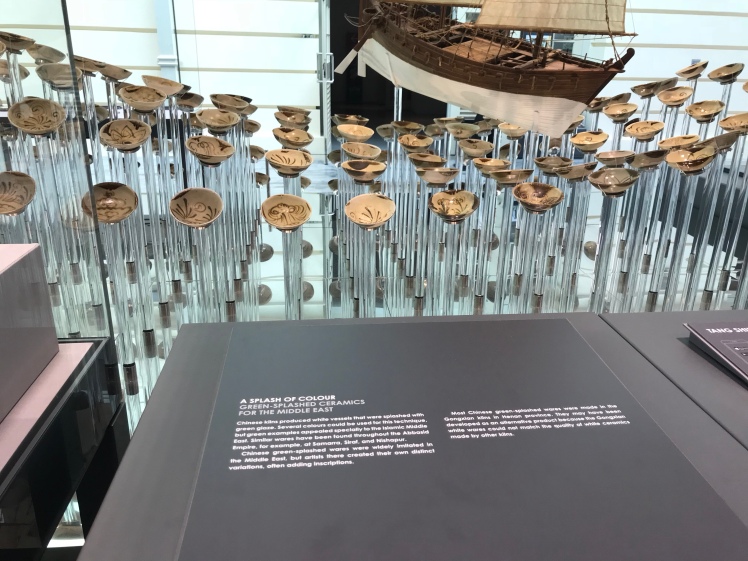 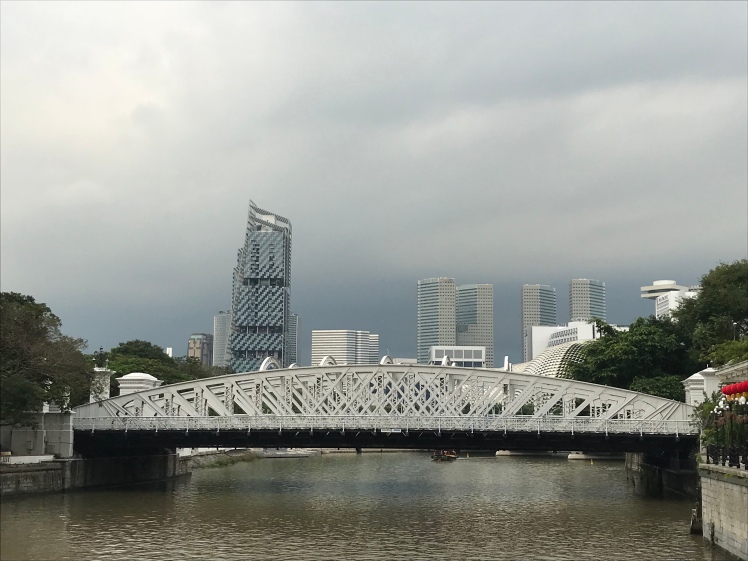 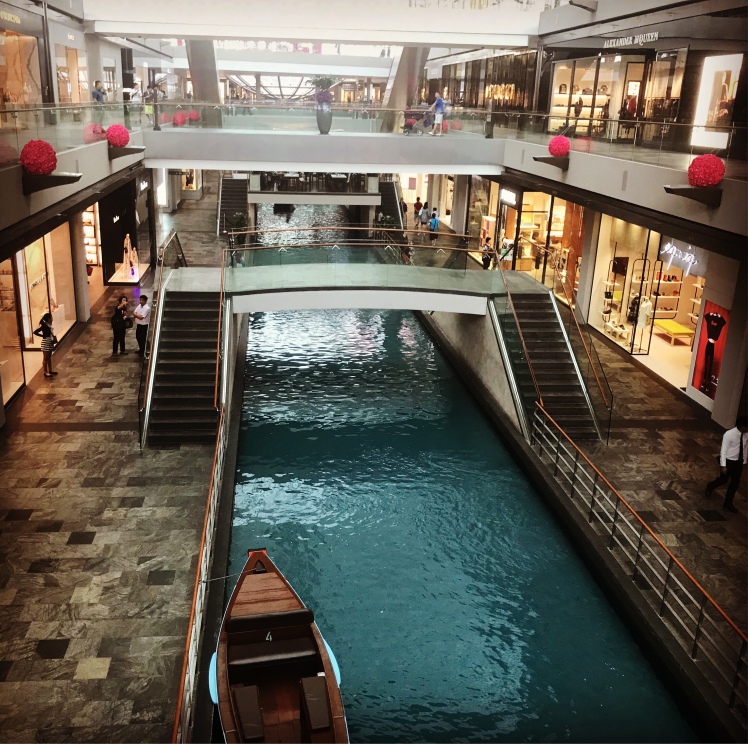 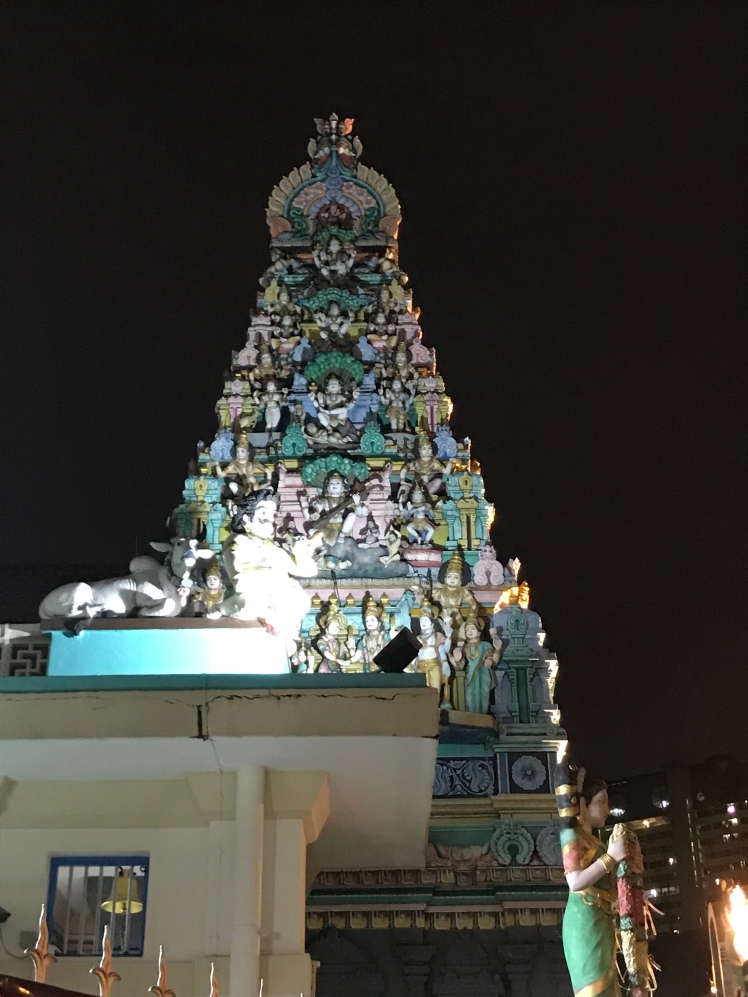 Scenes from the museum and from around the city including a snapshot of actors filming what appeared to be some sort of police procedural.

David is a professor of Judaic studies at Brooklyn College, and he gave the girls, Mike, and me a terrific history of a part Jewish history that often gets glossed over in Hebrew school: the transition from the Hebrew cultures of the Biblical period with practice focused on the Temple in Jerusalem to the transformation into a text-focused culture sitting at the intersection of Hebrew and Greek culture. Julianna, our resident Rick Riordan fanatic, was just awed that David knows Ancient Greek. It was really neat when we were in one of the museums together to see coins from the Middle Eastern cultures David studies that had made their way through trade all the way to Southeast Asia.

On our final day in Singapore, we had a kids’ day which was focused on the girls playing in the giant splash pad (and on the playground) in the Children’s Garden at Gardens by the Bay. 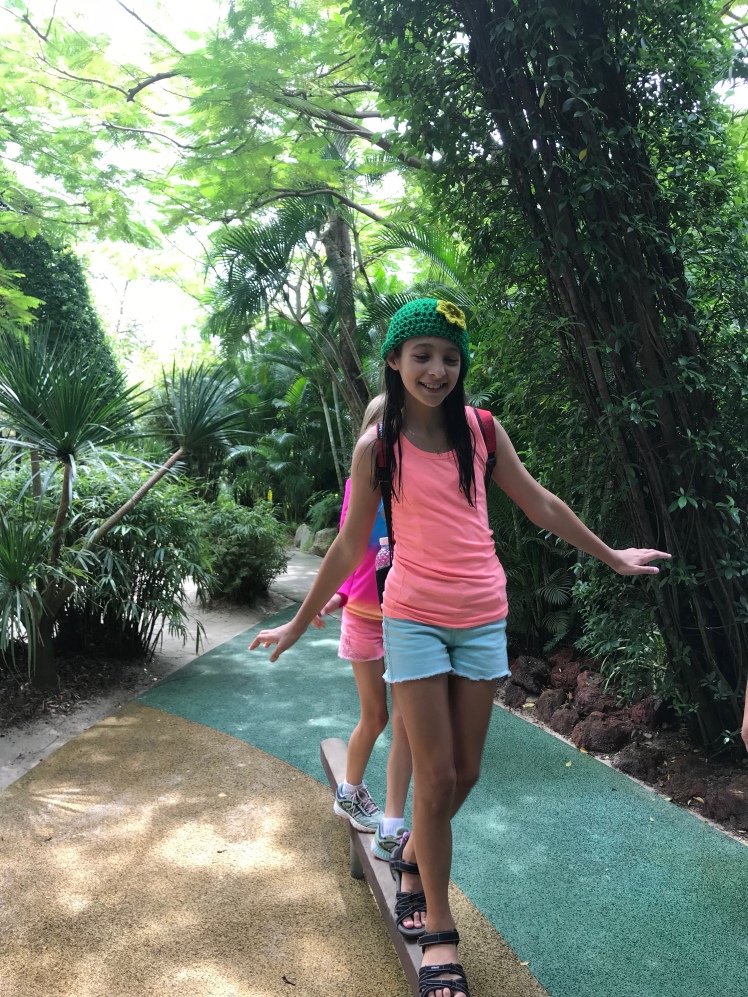 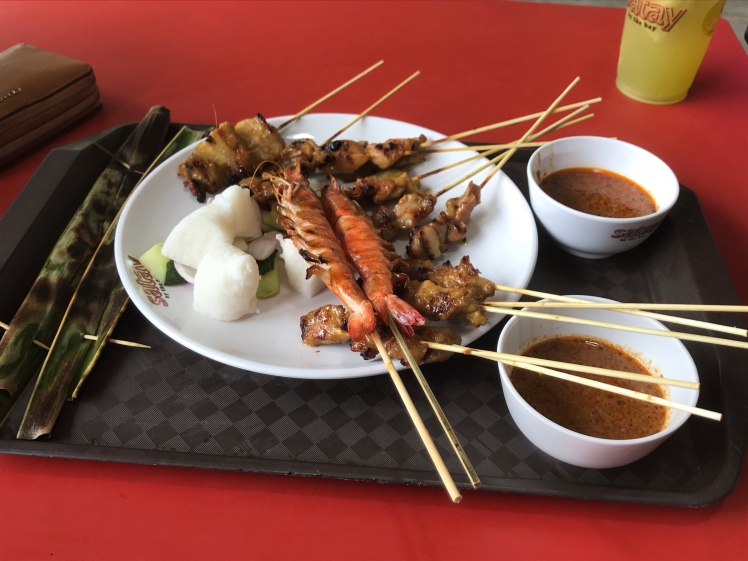 Singapore was a really amazing city — the food markets, the places of public accommodation, the incredible transit system, and the cleanliness were all astounding (oh, and did I mention the food?). In some ways, it made even Manhattan feel like a second class city. (Both in Melbourne and in Singapore I was amazed at the lack of that low-level rotting city smell that seems to characterize New York or Boston especially on summer days — and in neither city did I ever see the heaps of garbage bags that sometimes feel like New York City’s trademarks.) In both countries it seemed to me that the US could learn a lot from how other countries do it — specifically in terms of Melbourne’s free downtown tram system and Singapore’s amazing (and fully air conditioned in both stations and the trains themselves!) MRT — but more generally from the idea that taxes and public spending are not automatically evil, especially when that money is used to bring truly modern public services and public accommodations to the people paying those taxes.