People have brewed beer (or something like it) for thousands of years. The Ancient Egyptians certainly brewed beer and doubtless people were brewing long before that. (We don’t know for sure what those brews were like because the recipes weren’t written down … since writing was invented after brewing!)

Lots of European countries brew beer (and most of it is pretty darn good) but Munich, Germany has a pretty good claim to Beer Capital of the World.

Let’s start with this.

This is where Oktoberfest is held every year in late September and early October (unfortunately it’s May right now). As I understand it, the entire space (it looks like a mile square!) is covered with beer tents. Wild.

Our tour guide mentioned that the Australian government sets up a temporary consulate in Munich for Oktoberfest, because so many of its citizens lose their passports after having a beer or two… or three…. (see below and you will understand that three beers might be quite sufficient even for Aussies).

Just for reference, here is the Hofbräuhaus, a famous Biergarten in Munich, not quite the size of the Oktoberfest field.

About those beers, here is an example:

You sort of get the scale based on the water glass alongside, but here’s another picture to help out. 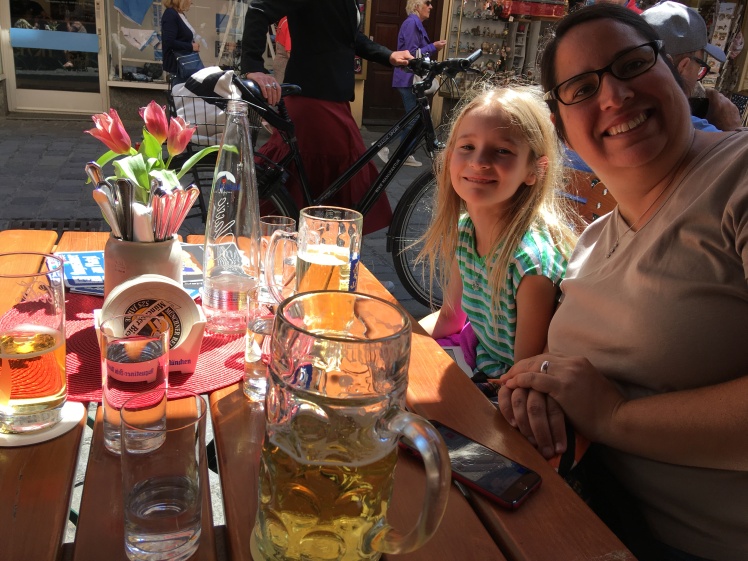 Yes, it’s a liter of beer, a whole liter, like half of a two liter soda bottle. Awesome. OK, I admit it, it was lunch time so I ordered a Radler (less alcohol in that liter, but still, a whole liter).

This reminds me of a story in my family. Apparently, after she retired, my maternal grandmother travelled to Europe in the 1950’s or early 1960’s.  She was in a cafe ordering a beer.  This was back when the U.S.A. had beyond no idea what the metric system was.  The server asked if she wanted the liter or half liter.  She spoke some German, but probably had no idea what a liter was and just said “gros” German for big, and she got a whole liter of beer to drink! Being a frugal person, she drank it all and then stumbled back to her hotel (but she didn’t lose her passport, and she wasn’t Australian)!