Hi from your intrepid blogger-adventurers!

We had a terrific first two days in Rhinebeck and Hyde Park, New York.

Our first accommodation was an AirBnB that happens to be a farmhouse located on the Schuyler farm in Rhinebeck. Yes, Hamilton fans… THOSE Schuylers.

Our lovely host, Priscilla, sent us for a walk past the Schuyler family’s actual home (it is now divided into apartments), to a Revolutionary War era bridge, a waterfall, and a little pond. 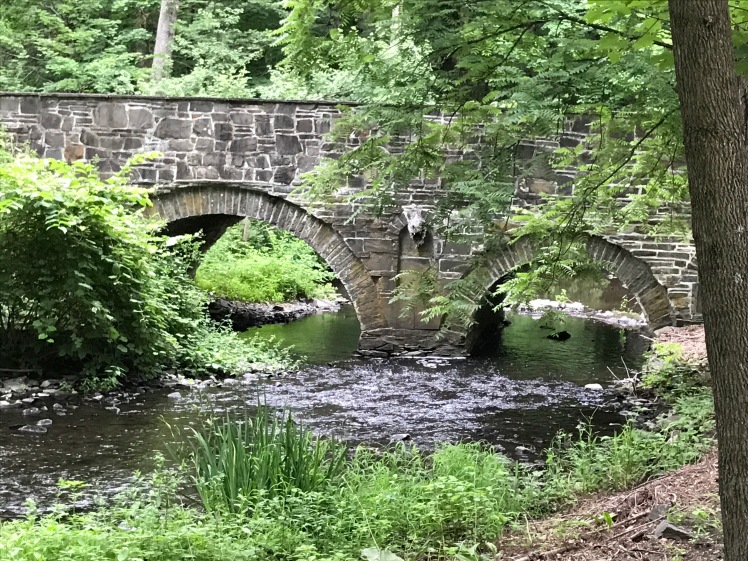 We also had a lovely time swimming in the pool. The girls even made friends with the host’s son (not pictured, as I didn’t ask permission).

Most of our trip, however, was concerned with more recent eras in history.

We visited Springwood, the Roosevelt family estate, and the FDR Presidential Library and Museum.  By the way, the Library and Museum was stellar in general (and I wish we’d had more time there), but in particular, if you have a chance to visit before the end of 2017, they’re currently featuring an exhibit about the Japanese internment camps during World War II that is a must see. So if you’re anywhere within striking distance of Hyde Park, I encourage you to take a day (or make a weekend out of it) and go before the exhibit closes on December 31, 2017. 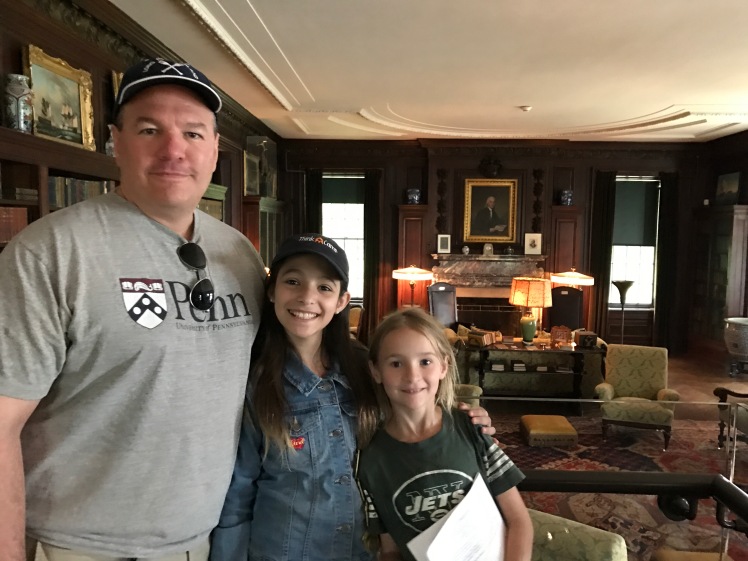 The girls appeared to get quite a bit out of the trip. They both completed Junior Ranger badges (duh) and learned a great deal about our 32nd President, although Julianna does NOT approve of his childhood method of studying birds (shooting and stuffing them) even though FDR’s father restricted him to shooting one male and one female specimen of each type of bird.

Last night, the girls officially started “World Schooling” by making covers for the American history books each of them is tasked with writing over the next five months. Then each of them made a section for FDR as well. I will post pictures later when they’re fully complete, but both girls were thoughtful and creative about the assignment.

Today was a crazy day. We got up and moved out of our first home-away-from-home of the trip. Then we headed down to Val Kill, which was Eleanor Roosevelt’s cottage and retreat for a tour. It turned out that the 10:30 AM tour we were in time for was one of two during the day that can be booked ahead online, so it was already completely full, and the next available tour was going to conflict with our lunch reservations. Thankfully, we had a Plan B, which was to head a few miles up the road to the one of the Vanderbilt estates, which is also now a National Historic Site. It is under massive renovation at the moment, so the furniture is covered and it’s not in its fully glory, but I think we still got a reasonably decent sense of this example of a Gilded Age home. As a relatively tiny exemplar of that period, I think it was helpful for us to see it before we tour the more extreme examples over in Newport after the 4th of July. Plus, another NPS-run site, another Junior Ranger Badge… 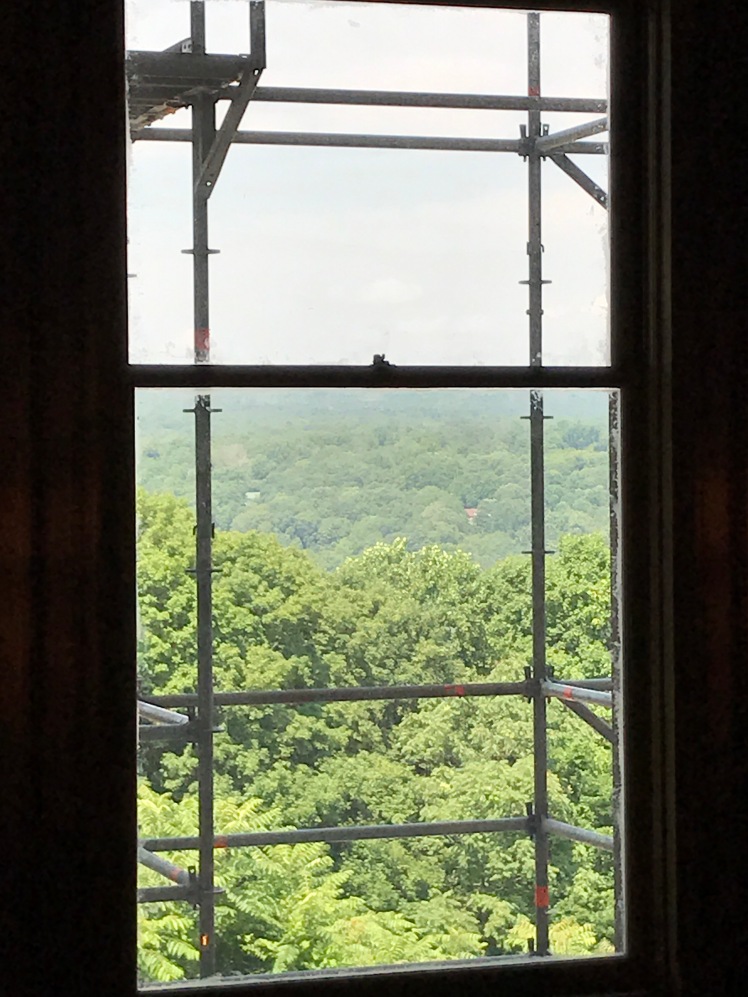 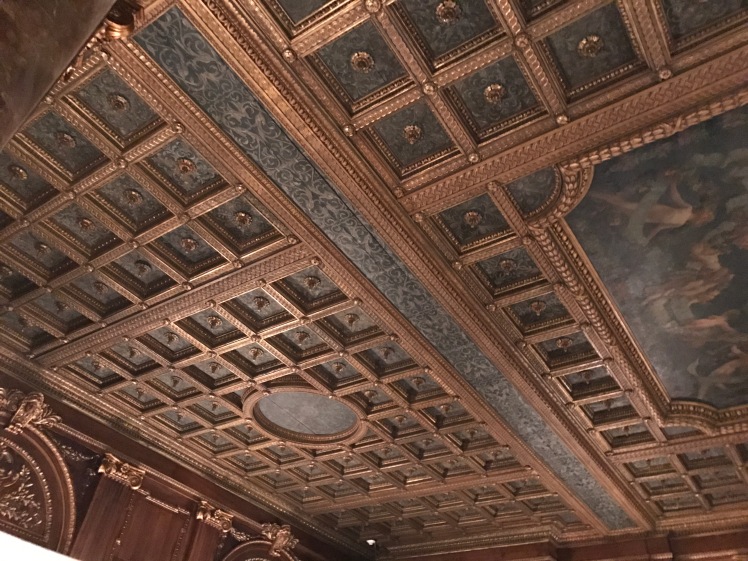 For lunch, we headed to the Culinary Institute of America’s Italian student-run restaurant, Caterina de Medici. The food was good, but not spectacular. Living in Montclair for a decade, with easy access to Manhattan as well, has spoiled me. I rate my restaurants by whether I talk about and even dream about the food afterward. This was reasonably  tasty, but not dream-worthy. Of course, they’re still students, yes?

What was worthwhile was taking the girls — especially Julie — out to a more formal restaurant (we picked the Italian, because when I read the menu it was the only one I thought had a hope of servicing something Julie might eat). I was glad that she got to practice using proper table manners.

Then we looped back to Val Kill to tour Eleanor Roosevelt’s retreat. The tour was excellent, and the girls loved the introductory movie about her. It is the only National Parks site dedicated to a First Lady. 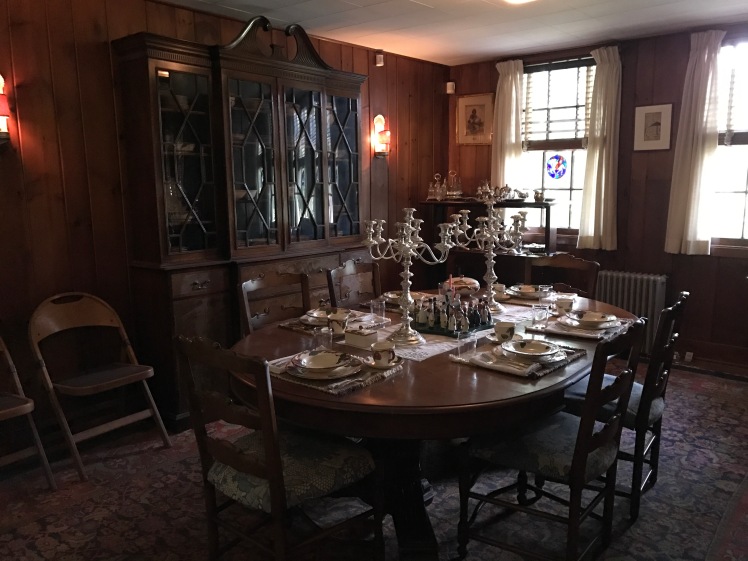 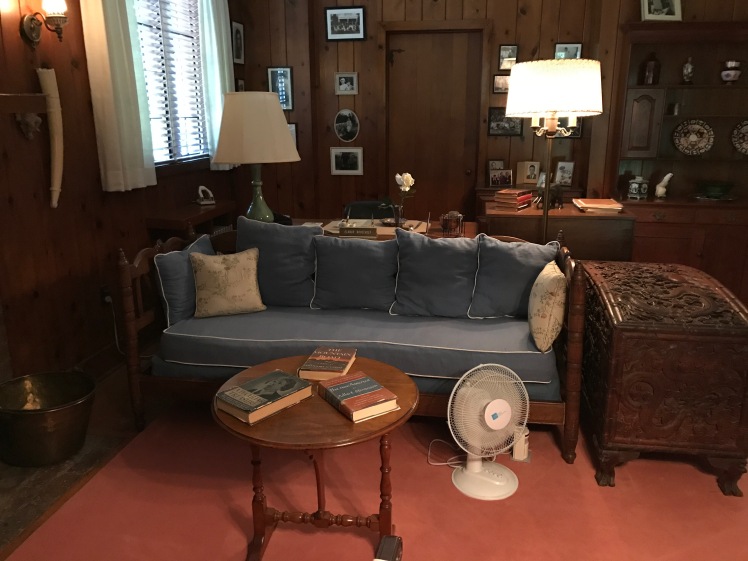 The girls once again earned their Junior Ranger badges, and as various rangers told us, the new Junior Ranger book at Val Kill was designed by an 11 year old girl. My girls now want to design one for the Vanderbilt site, which right now only has a generic “historical preservation” Junior Ranger activity.

The coolest part, by far, however, was meeting Doris Mack, who is a 95 years young park ranger and was a personal friend of Eleanor Roosevelt. The kids were blown away by that one. As you can see, Ms. Mack has a photo of her meeting with Eleanor Roosevelt when she was just a touch younger than she is now.

After that we headed up through a nasty rainstorm to Conway, Massachusetts, where we’re staying in an adorable little AirBnB on the side of a ravine. We popped over to Shelbourne Falls to pick up supplies for dinner and tomorrow we’re off to… well… I’m not quite sure yet!

7 thoughts on “The Hudson Valley”