After spending almost the entirety of November back home in New Jersey, we flew to Hawaii and escaped all that early snow in the Northeast (sorry neighbors).  We spent last week on Oahu, the most populous and commercial of the Hawaiian Islands. Rather than spend our time in the most touristy areas of Honolulu or Waikiki Beach, we rented an airbnb about an hour from Honolulu in Waianae.  Waianae is one of the less economically advantaged areas of Hawaii, but it still has all the natural beauty and pleasant weather common to the whole State. I have to say, it was a bit jarring to see what were clearly shantytowns and permanent tent residences set up along the shoreline. With the cost of housing here, and given the year round pleasant climate, if you can’t afford a more permanent dwelling, I guess you don’t need to in order to get by.

We spent a good amount of time relaxing this week, but we did take in a few of the sights on Oahu. First was a fascinating but somber day we spent at the Pearl Harbor memorial.  As all of you students of history will remember, on December 7, 1941 the Empire of Japan conducted a surprise military strike on the U.S, Army and Navy bases at Pearl Harbor.  More than a dozen U.S Navy ships were sunk and over 2000 U.S. Servicemen and Servicewomen were killed.  (And incidentally, my parents had to postpone their wedding for three weeks since my Father couldn’t take leave from his Army post once the Country was at war).  The memorial is a solemn commemoration of the crew members of the U.S.S. Arizona and the other ships that were destroyed that day.  Many of the ships were able to be re-floated to fight again, but the Arizona was too badly damaged so it remains on the bottom, with the its crewmembers entombed therein forever, and the memorial built on top of it.  Several pictures follow: 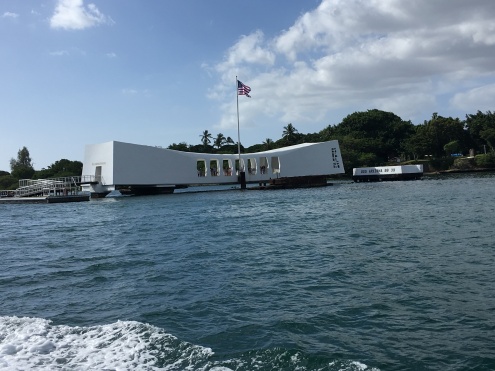 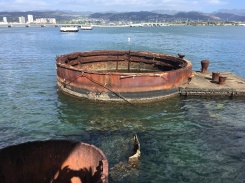 The memorial is the final resting place for the sailors killed here and anyone who survived is entitled to burial here – all the names are memorialized on this wall.

A more fun and less serious sightseeing day involved a visit to the Polynesian Cultural Center. I am still trying to figure out how I feel about this place. It was eastablished by the Mormon Church (the LDS church, not the crazy fundamentalist Mormons we saw in Southern Utah a few months back!). The Center clearly explains that they do not intend to be explicitly accurate in their depictions, but do intend to present a picture of the music, dance, crafts and cultures of various Polynesian peoples.  Although the presentations were sometimes light on details, overall they did a good job. What is perhaps concerning is the emphasis that the performers are primarily students at the nearby branch of Brigham Young University and that the proceeds of the operation help fund scholarships.  On the face of it, there seems to be nothing wrong with this, but it seems to beg the question whether the center plays a role in prosthelytizing  for the Mormon faith among the Polynesian people where the students come from? Must you be a Mormon to get one of these scholarships and student jobs performing here? Anyway, some pictures (and the luau was excellent!) 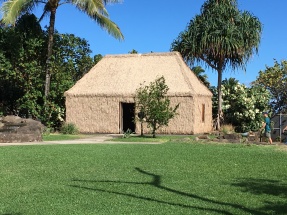 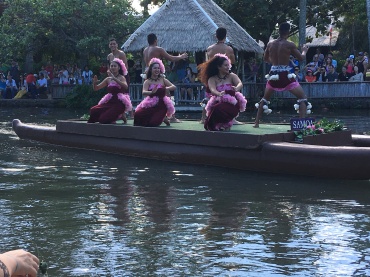