We are still catching up on our blogging from Australia and Singapore, even though we are already in Thailand. So, here is a review of two road trips we made from Sydney before we headed up to Cairns to see the Great Barrier Reef. We actually missed a ridiculously hot day in Sydney (when the thermometer went well above 40 degrees – Celsius) because we had travelled up into the Blue Mountains where it was cooler (still hot, but not nearly so ridiculous). In the Blue Mountains, we saw some great scenery and a little bit of the history of mining that used to happen in the region. Check out the photos below.

Here is an old mine train that travelled down a veritable cliff face for more than 1000 feet to get miners to the mining area.  We got to ride on the modern version of this, much nicer and safer!

After our stay in the Blue Mountains, we hit the road and headed a couple hours South to Australia’s Capital, Canberra.  Canberra was a planned city, intended from the start to be the Capital of Australia, much like Washington D.C. in the U.S.  Honestly, there isn’t a huge amount to see in Canberra, but our visit to the Capital complex and Parliament House was pretty cool. We also had a fascinating discussion with our tour guide about Australia’s mandatory voting law (you get fined if you don’t vote!) and about how the minority third party in Parliament currently has an outsize influence by aligning with one of the major parties to allow it to form a government and enact legislation.

Here are pictures of the government complex (it was about to storm) and the formal entrance lobby. 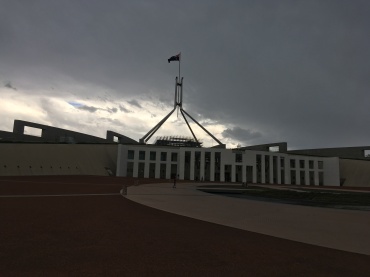 Australia has a bicameral legislature with a Parliment and a Senate.  Here is the Parliment chamber (reminiscent of the British House of Commons’ green benches):

And this is the Senate chamber:

After our road trips, we headed back to Sydney to catch our flight to Cairns and the more tropical Northern part of Australia.