Recently we visited both Mystic Seaport (which I HIGHLY recommend) and Plimoth Plantation (not spelled wrong; also really fun). These places both mark important times in our country’s founding and the next years of living here.

Personally, I completely LOVED Mystic Seaport. It was like every book that you’ve ever read with some of the 1800s or similarities to the 1800s in it such as, Anne of Green Gables, Little House in the Big Woods, and that era of reading content. The Seaport had a couple indoor exhibits, ships to tour, a full, working shipyard to wander in, and a town (well, a village really, but you get the point). In total, the museum boasts a proud 19 acres of museum and history.

My favorite buildings there were probably the one room schoolhouse, the drugstore and pharmacy, and definitely the printer’s. Places of note were the cooperage, clock maker’s, and the blacksmith. The cooper taught us about barrel-making and different techniques, while the clock maker explained how the different gear systems interact with each other. 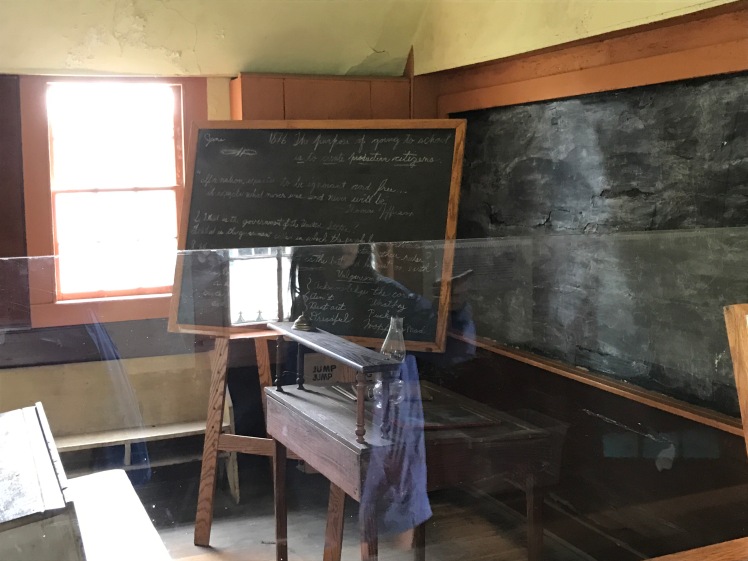 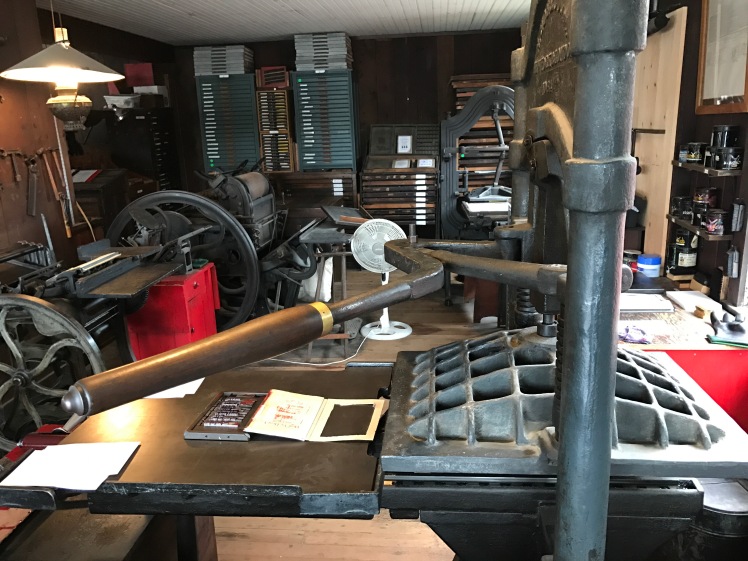 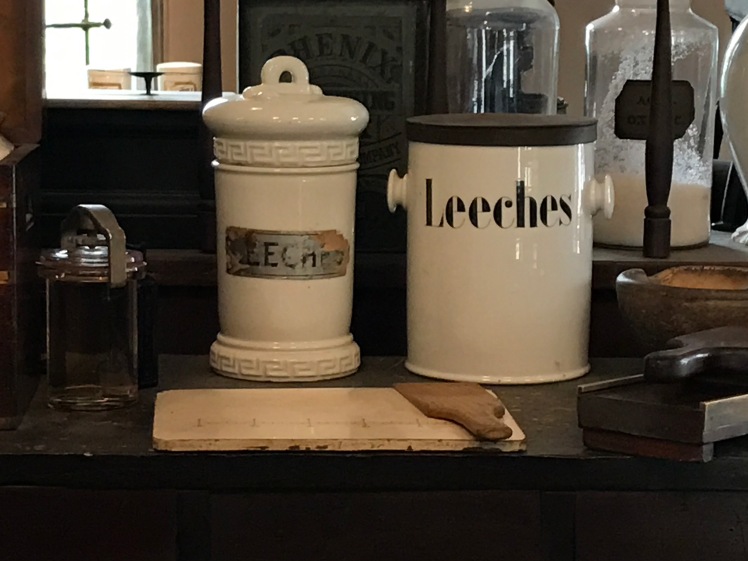 Plimoth Plantation was cool too. We first went to the Wampanoag part where we saw a winter house, summer house, garden, canoes, and a cooking area. It was very interesting and taught me a lot. I learned that the Native Americans in that area moved downstream for the summer and upstream in the winter. Their houses had different furs in them as cushioning, blankets and more. The summer house had mainly deer fur, though the winter house also showed off black bear, raccoon, and skunk.

Next we went to the Craft Center where we learned about different crafts and the artisans who practice them. We saw baking and cooking how the Native Americans and settlers would have been able to cook. We also met a spinner who told us about spinning and a bit about dyeing wool and string. With all the facts in hand, I decided that Julie should become a spinner. It is pretty much her dream job, making string, aside from the… eww…

Yup, beetles. Little crushed up bugs’ torsos can become the dye for any purple to scarlet items of clothing that you wear. Most natural dyes come from roots like madder instead of bugs, as I learned from the spinner and the awesome book Gathering Blue by Lois Lowry.

Our last stop was the re-created Plymouth settlement there. It was full of reenactors, artifacts, chickens, gardens, houses, chickens, and fields. It had a well, chickens, a fort with cannons upstairs, chickens, and a ramshackle border fence. There were also chickens. The reenactors were interesting and shared many facts, including facts about chickens. They were quite perplexed when I said that my dad did the cooking but that he was not employed as a chef, that he works as a barrister (lawyer). 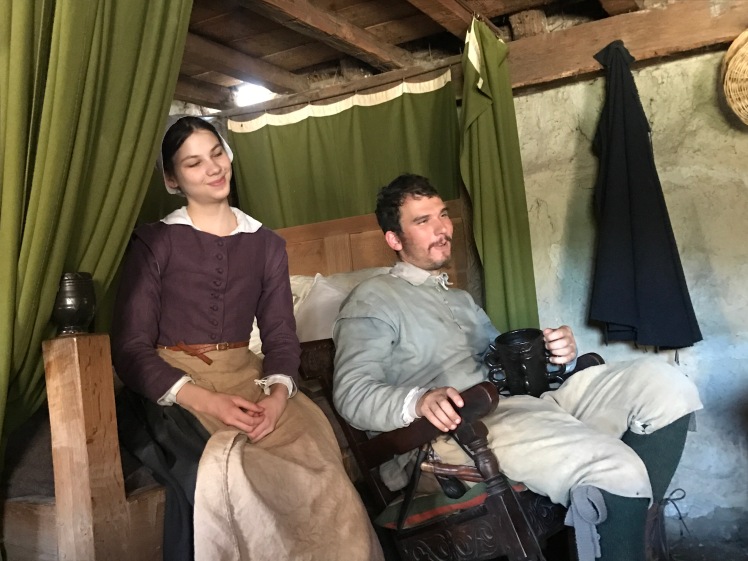 After walking through the whole village and stopping back at the fort to explore the top floor (spoiler: we found cannons) we headed back towards the parking lot, stopping on the way to buy an overpriced Coke.

Both trips were really fun and I recommend them to everyone. At Mystic I learned about oysters and catching them, and at Plimoth I saw the “Pilgrims” eating clams. 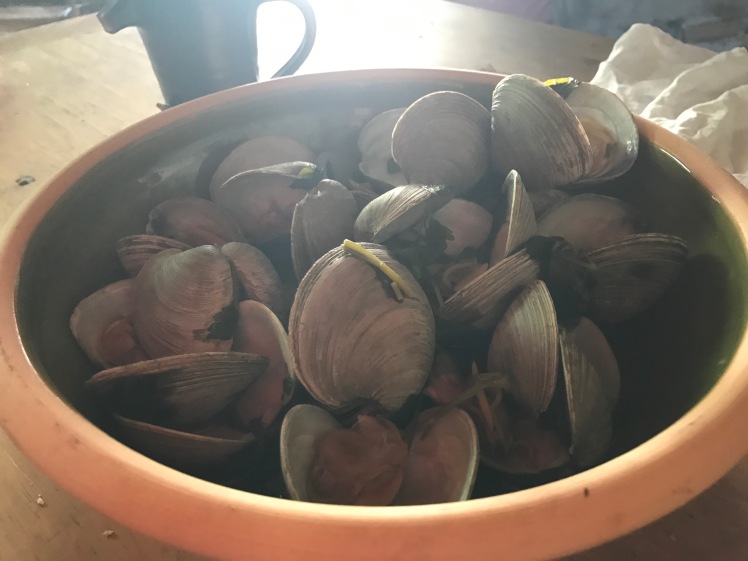 EXTRA TIDBIT ABOUT CHICKENS: At Plimoth we got to look in at a chicken coop and there were more chickens- and a rooster- wandering the village, walking into the homes, and getting chased by visiting children. There weren’t any at Mystic but these made up for it. Super cute chickens! 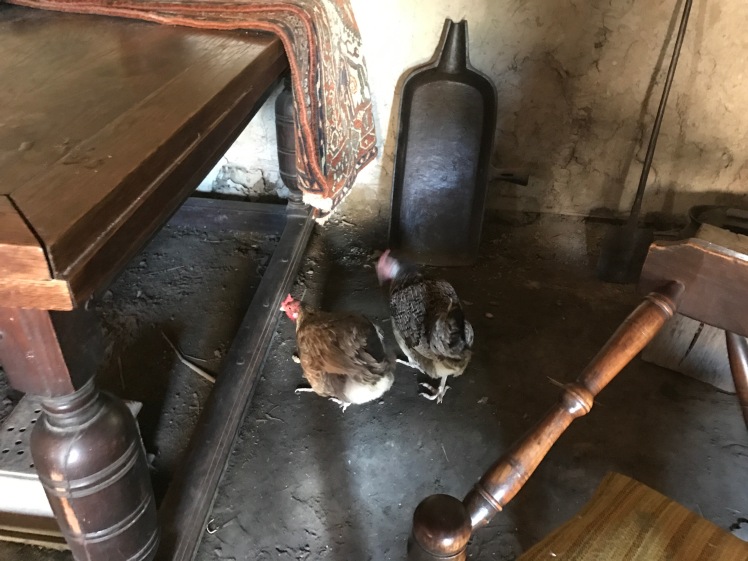 5 thoughts on “Preserved Pieces of History”