So I'm still a bit behind on blogging, but working to get caught up.

After Acadia National Park, we spent a lovely week at a cabin on Highland Lake in Falmouth, Maine. We chose this particular cabin both for the price and the location: it was less than 10 minutes from Portland, an easy drive to the ocean, and also not too long a haul (about an hour or so) out to my friends in western Maine. 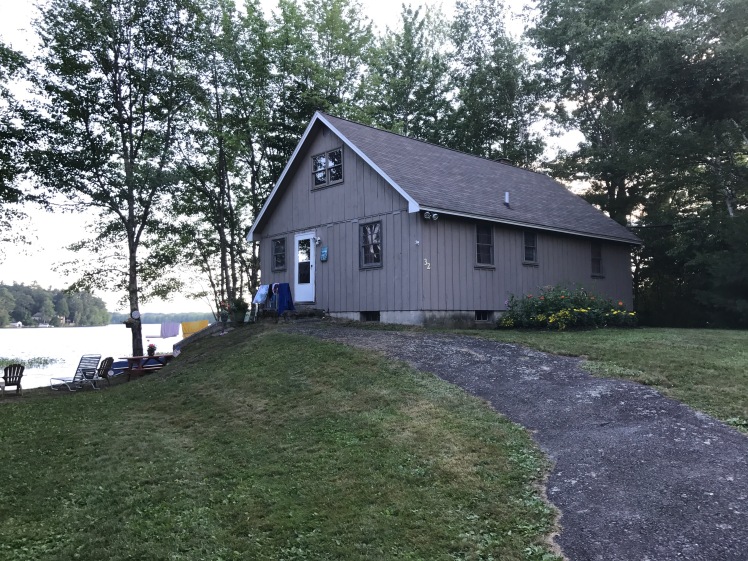 Looking at our Maine cabin from the road. The cabin was perfect for us — when we first arrived, it was a little rough on the olfactory senses (I think the owners must have a cat and it's a little musty from some small puddles of water in the basement), but a few spritzes of Febreeze took care of most of that effectively.

Looking at our Maine cabin from the small sandy beach.

By the way, if you're ever looking for a cabin for a week's stay in the Sebago Lakes region of Maine, I highly recommend Krainin Real Estate. I've rented through them four or five times over the past 15 years or so, and they've consistently come through.

We generally had a quiet week. I spent a lot of time reading in our new ENO hammock, which was a huge hit. We need to figure out if we're going to spring for another hammock or two, as the biggest issue is our arguments over who gets the hammock next. I also might spring for a mosquito net, which would have helped at Acadia, but wasn't necessary when I had the lake breeze on Highland Lake.

A perfect hammock spot next to the water. 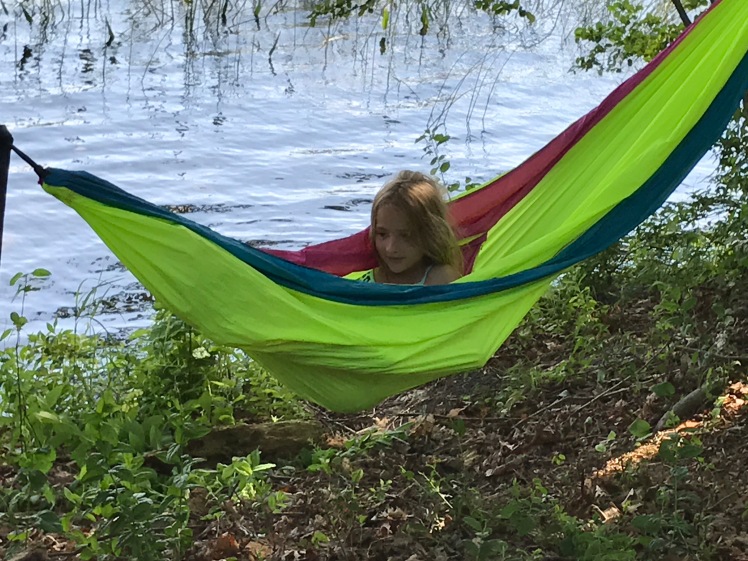 One highlight of the week was meeting up with three of my former teaching colleagues from Oxford Hills Comprehensive High School in South Paris, Maine. I'd post the totally adorable picture of the four of us together, but two of them, who are internet-shy, would murder me. So just trust me that we had a lovely picnic lunch, some interesting political discussion, and then we grabbed beers afterward with one of them at a new craft brewery in Norway, Maine.

This is a photo of my kids playing on the playground where we met my friends, since my friends don't want me to post my photo of them.

We also took the kids out to a Portland Sea Dogs game — GO SEADOGS — where Elizabeth spent her own money on a pair of knee-high Seadogs socks. Good kid! 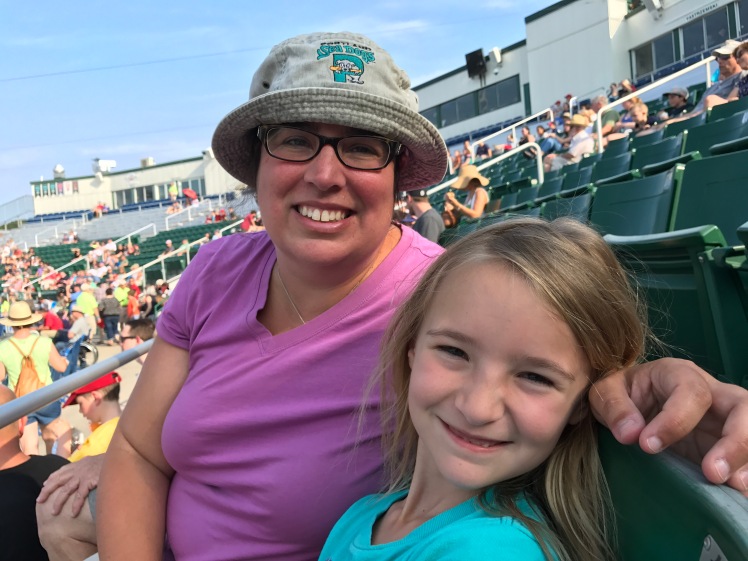 Dinner that night was delicious sushi in Portland, which included hilarious people-watching of the 3 teenage boys sitting at the tatami mat table behind us. As I wrote immediately afterward on Facebook:

Sat in the tatami seating for delicious sushi in Portland, Maine tonight. Three either high school or college age young men were seated at the tatami table behind us.

First, I was listening to a bunch of:

"Dude, seriously, stop touching my leg" and various iterations along the same lines.

Then, at the end of the meal, one of the young men apparently could not find one of his shoes in the recessed areas under the tatami mats. So they're all getting down on the floor, sticking their faces into the shoe storage area, etc. Lost shoe kid gives up and goes to the bathroom with only one shoe on. A moment or two later his friend gets down to look and almost immediately finds the "missing" shoe. Then he spent the next couple of moments trying to decide whether to tell his friend, who was still in the bathroom, that the shoe had been found, or whether to let him hobble home without it for being an idiot. He eventually clued his friend in — and these kids were sweet, one stopped the one with the missing shoe before he could drop a F bomb in front of my kids.

I commented to missing shoe kid on the way out that the two shoe look suited him better and he laughed.

The California roll with real, fresh Maine crab was outstanding. Sadly, Elizabeth is so used to the imitation crab used at 99% of sushi places that she was nonplussed by the real thing. 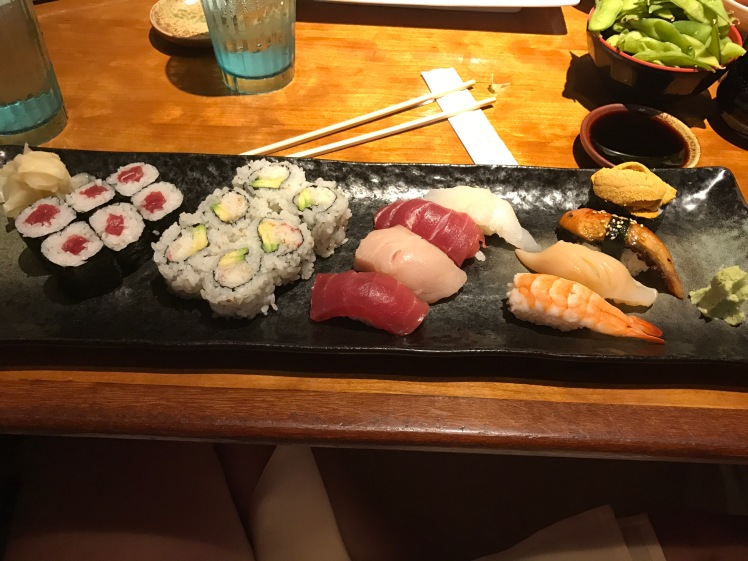 We ate whole lobsters twice — once cooked on our own at the cabin, and the second time at a lobster shack on Harpswell Neck, where my kids (and husband) were stunned to see how what had been a gorgeous, sunny day back at our cabin in Falmouth became a fog-socked early dinner out on Harpswell Neck. The lobster was tasty and cheap, however (loved that you had an option of adding a lobster to your entree for $9.99), and we didn't have to clean up afterwards.

We also enjoyed meeting up with good friends from our street back in New Jersey (they actually live in the next town over, as the dividing line is on our one-block street) for fresh lobster rolls in Cape Elizabeth, Maine, where the kids had the extra joy of going tide pooling on the rocks next to the lobster shack. It was wonderful to see friends from home (we encourage ALL of you to meet up with us), and then we had a lovely time exploring Portland Head Light with them for part of the afternoon.

Our friends Stu, Lisa, Ryan, and Daniel on the lawn of the lobster shack in Cape Elizabeth, Maine.

La Familia at Portland Head Light (which, despite its name, is actually in Cape Elizabeth, Maine, not Portland, Maine). 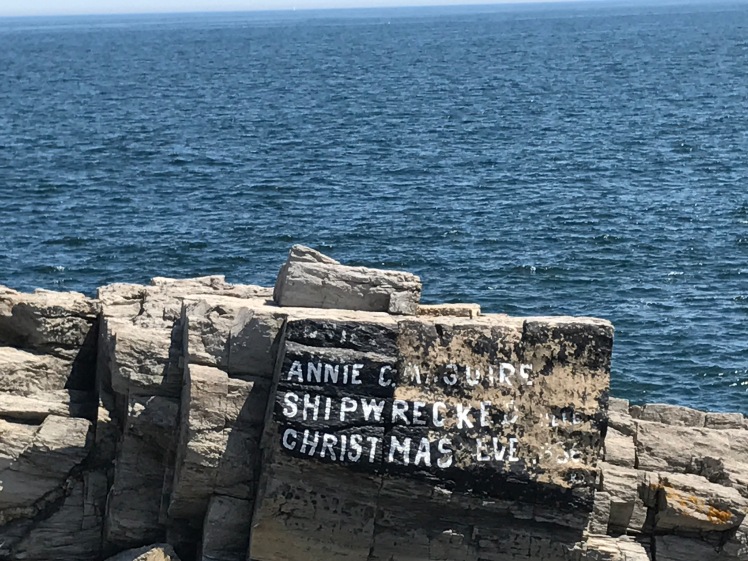 So this rock is immediately adjacent to Portland Head Light, yet the ship managed to wreck on the rocks just in front of the light house anyway. Oops. Apparently the light house keeper and his family were able to rescue all the people from the ship, and fed them a tasty Christmas dinner as well.

While tidepooling at the lobster roll place, we saw these amazing rocks all along the coast. So later that week, I took the time to do a little research to learn why the rocks look so much like petrified wood (they're not — see below), and sent some pics and links to Elizabeth's middle school science teacher, who loved them and wants to use them in her class. That is one thing I love about this trip — the collaborative spirit between Elizabeth's teachers back at home, and their support for us out on our adventures. 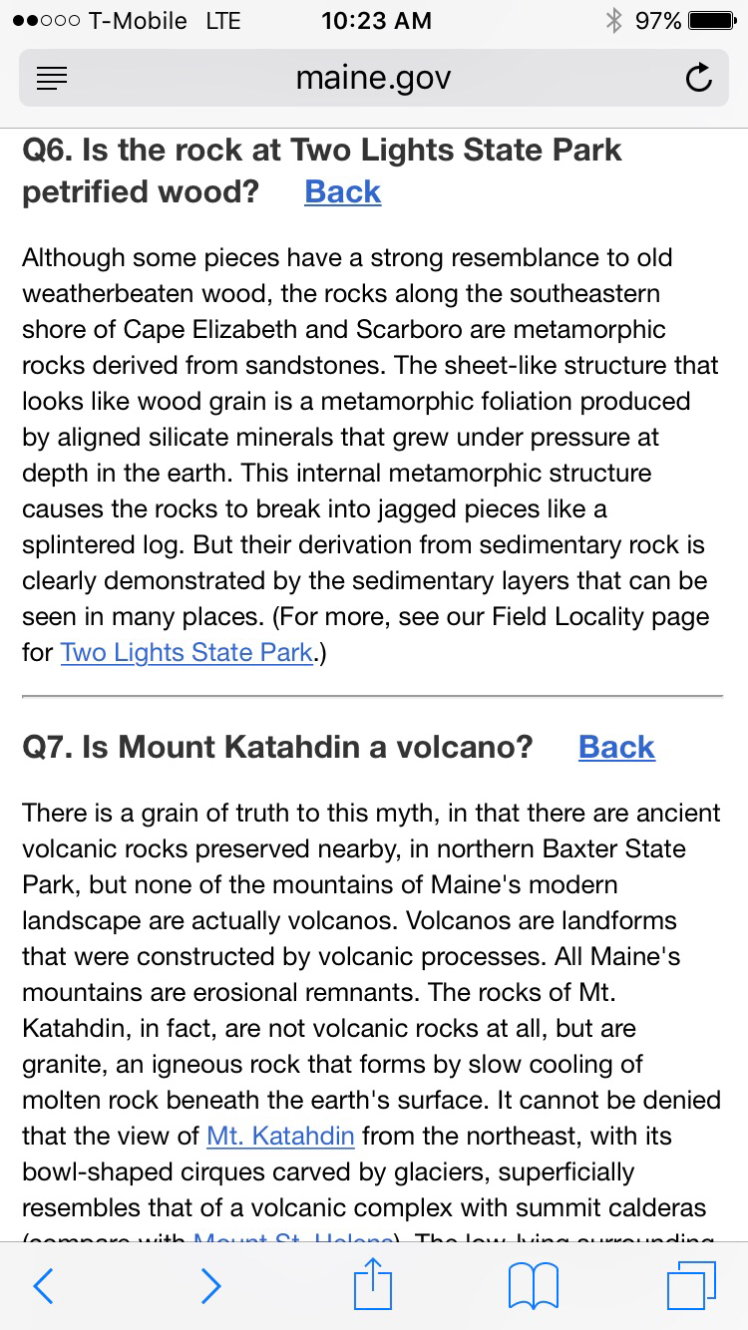 It's not shocking that people commonly ask the petrified wood question. 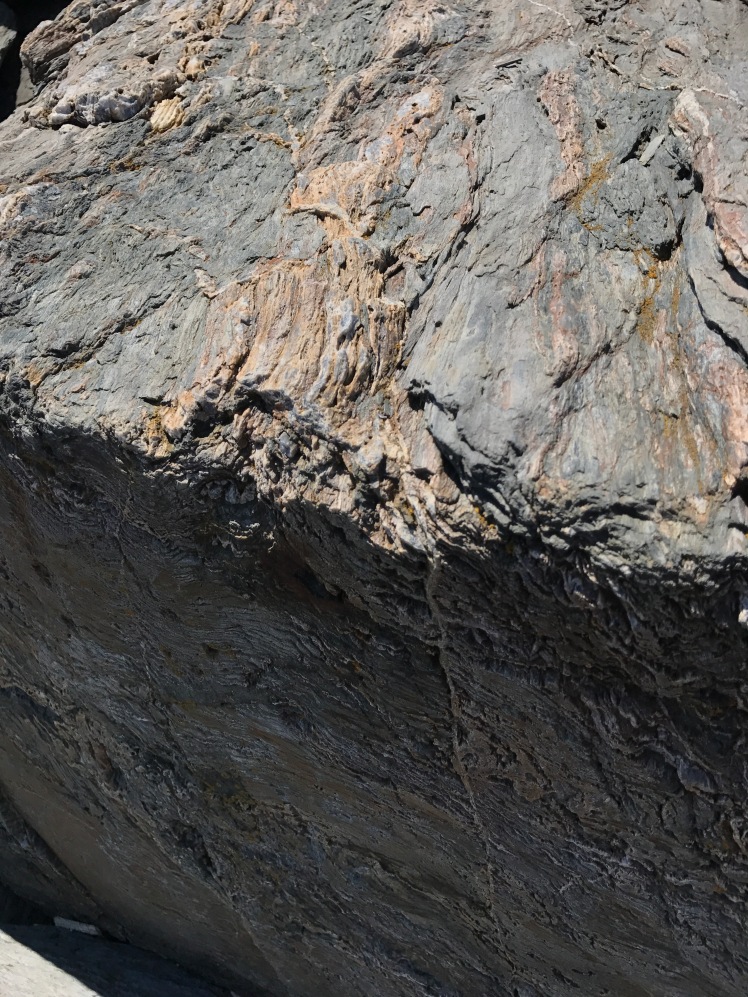 Some of the rocks that look like petrified wood, up close — I have many more like this.

Awesome view into a tide pool.

We also took a trip to L.L. Bean's flagship store in Freeport (I wanted a better suitcase than the monstrosity I'd been dragging around since we left on June 27th), and Julie needed a more reasonable suitcase as well. Pro Tip: If you're in the flagship store and the price has recently increased on the item you want, look around to see if there are of the item you want still bearing tags for the old price. If you point the price discrepancy out at the register, you'll get the old price. We saved $40 on 2 duffles (each was priced $10 below current retail) and a suitcase (priced $20 below current retail).

Posing with the duck boot. 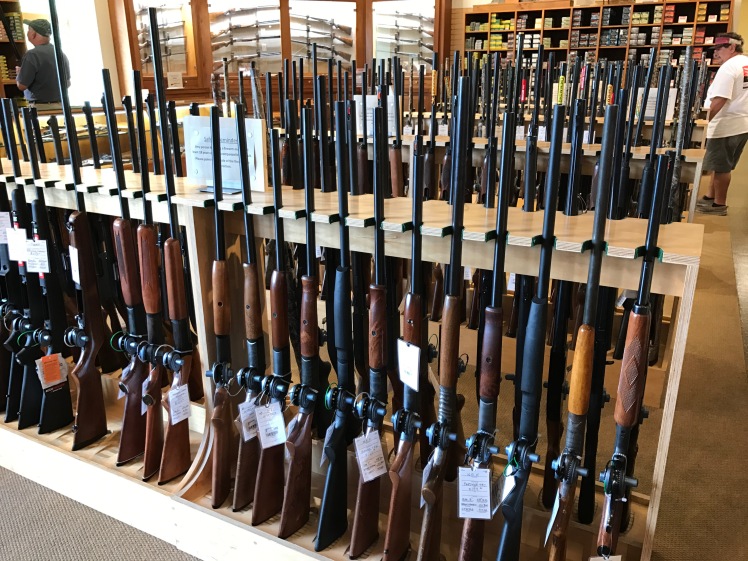 Toto, we're not in Jersey any more… (funny, REI and Campmor in Jersey don't have this department) 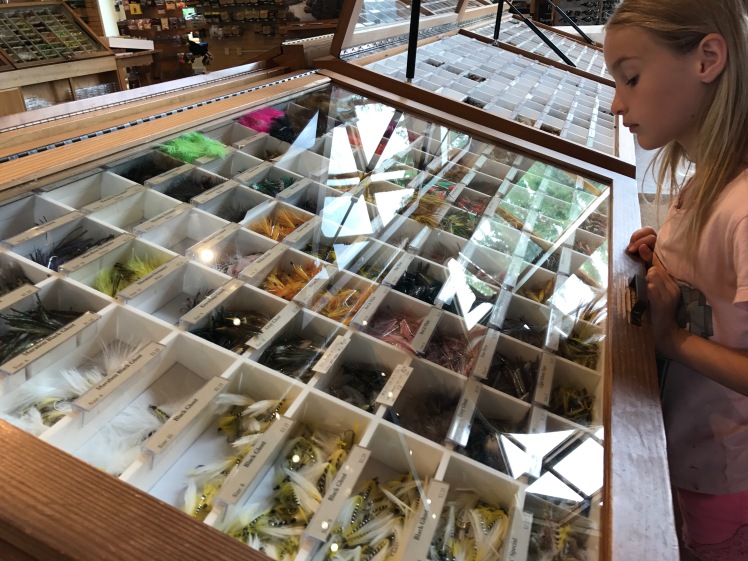 Julie, who has an intense need to pick strings and carry little bits of stuff in her hands at all times, might have found her new avocation — tying flies. 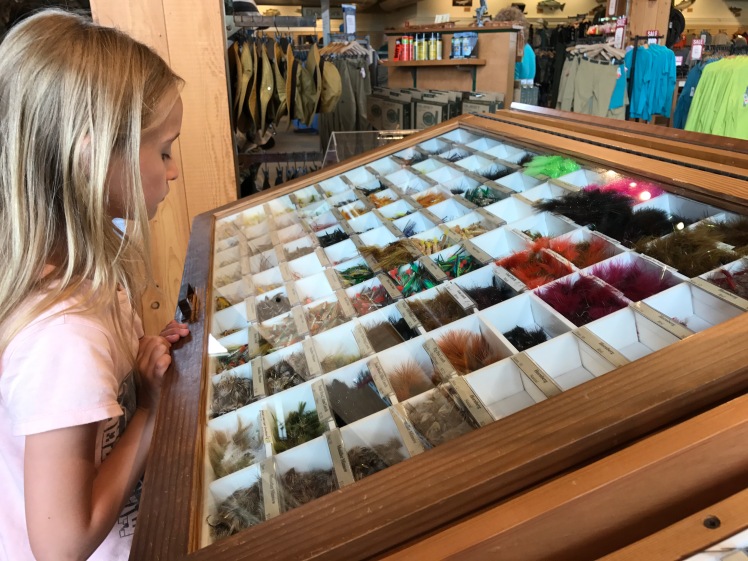 Julie continues to check out the fly-fishing flies. 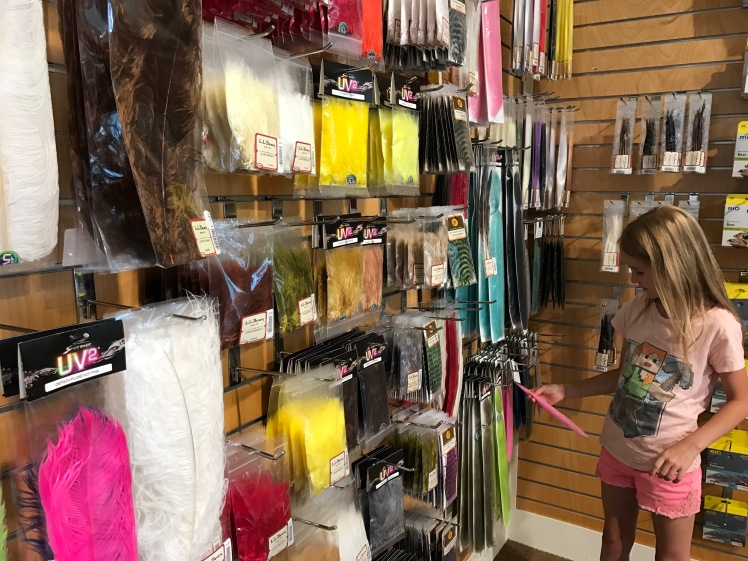 Julie discovering that Beans sells kits and materials for tying one's own flies.

Elizabeth would say that the only good raccoon is a dead raccoon. Here, the kids are practicing stomping and dominating the evil masked bandits after chowing down on Ben and Jerry's.

One of our other outings was to the closest McDonald's, as Mike wanted to sample a McDonald's lobster roll. At $8.99, it was cost effective, and reasonably tasty. The bun needs some work, but overall, not a bad deal. Plus, chicken nuggets with hot mustard sauce. Yum! Julie is generally horrified and offended by the concept of McDonald's, but even she survived, and hey, unlike our cabin, McDonald's had at least some WiFi. 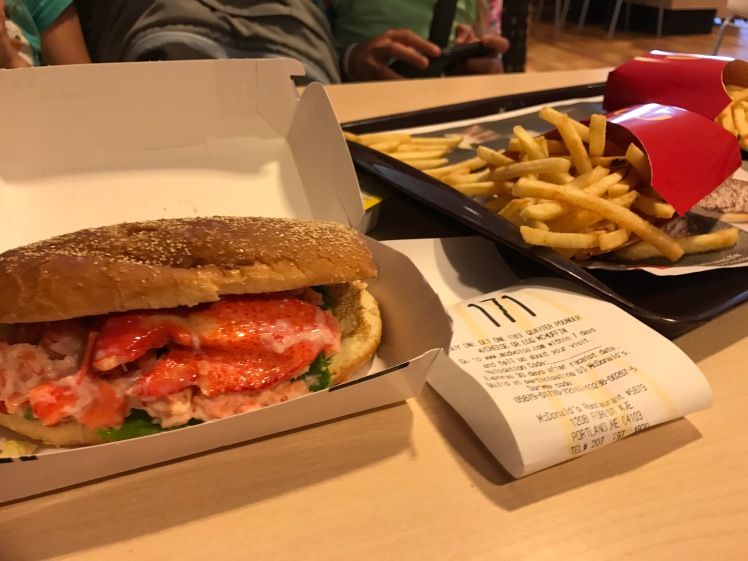 Yup, there it is — it's not a unicorn, it's the McDonald's lobster roll.

As long as we were headed out to McDonald's, I stopped at a convenience store on the way home to pick up a can of Moxie, Maine's unique soda. It certainly is distinctively different. No one in our family jumped on the "Yay, Moxie" bandwagon, let's put it that way. Clearly, it's an acquired taste.

On the day we met up with my teacher-friends in the Oxford Hills, we also stopped at a far corner of our school district to visit Seeds of Peace Camp. Seeds of Peace is a program that seeks to make a positive difference in conflict regions around the world by bringing teens from both sides of a conflict together to live in a cabin, participate in summer camp activities together, hopefully make at least one friend from the "other side," learn that their enemies are human, and to participate in meaningful and thoughtful daily coexistence sessions facilitated by trained conflict resolution experts. Back in 2000 (see below), I was bunk and waterski counselor there, and an old friend of mine now runs the organization. So we stopped by for a quick visit in the middle of Color Games.

As you may or may not know, a common Maine tourist slogan is "Maine: The Way Life Should Be." I like this riff on the slogan. 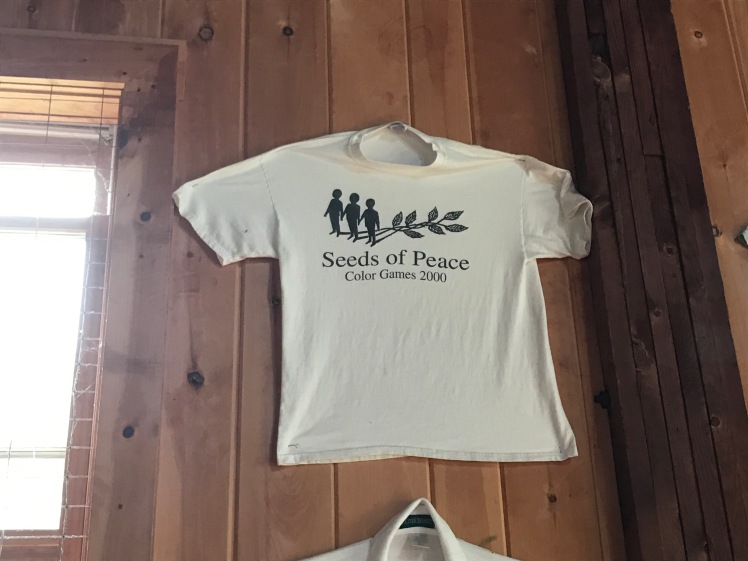 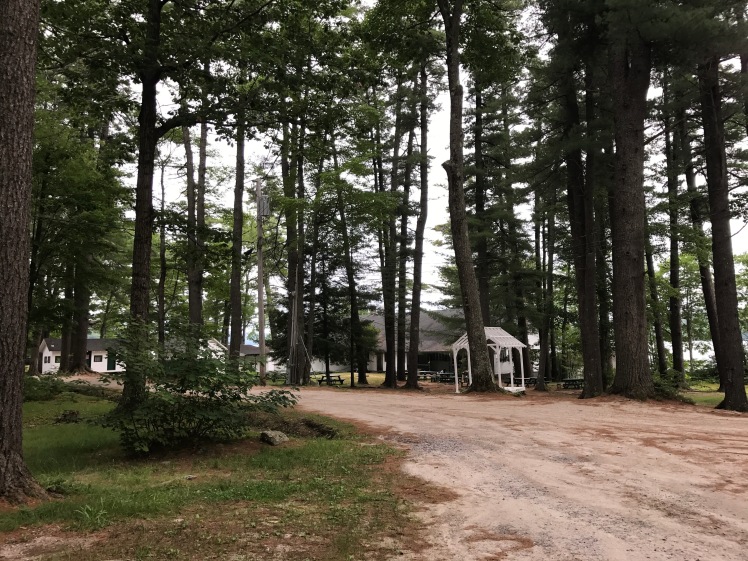 I love those tall pines. I grew up going to an all-girls summer camp in Maine, and before Seeds of Peace Camp was Seeds of Peace Camp, it was a boys' camp. So back at age 11 or so, I used to come here for socials once or twice a summer. I think they were one of the boys' camps we consistently beat in waterskiing as well. 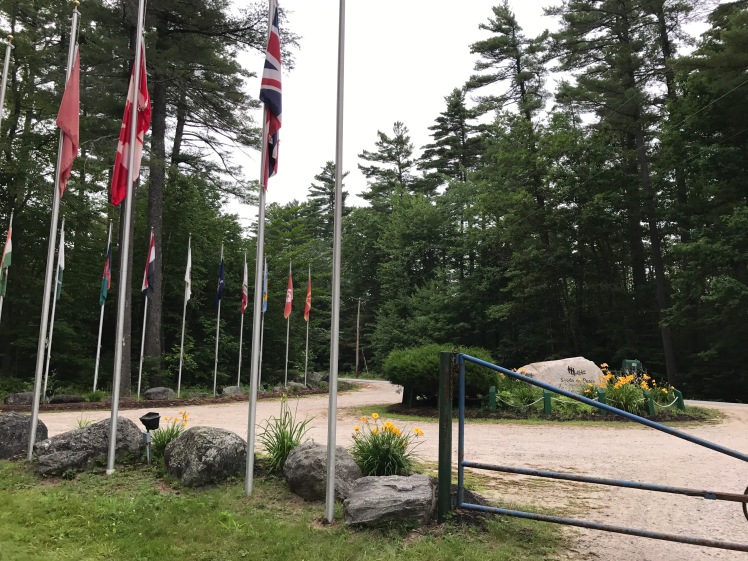 Seeds of Peace entrance with flags of the many nations represented there — the flags stay outside at the entrance.

Back at the cabin, I also got a kick out of teaching Mike that when you're soloing in a canoe (our cabin had one included as part of the rental), you turn the canoe around and sit in the bow seat if you don't want it to look like this: 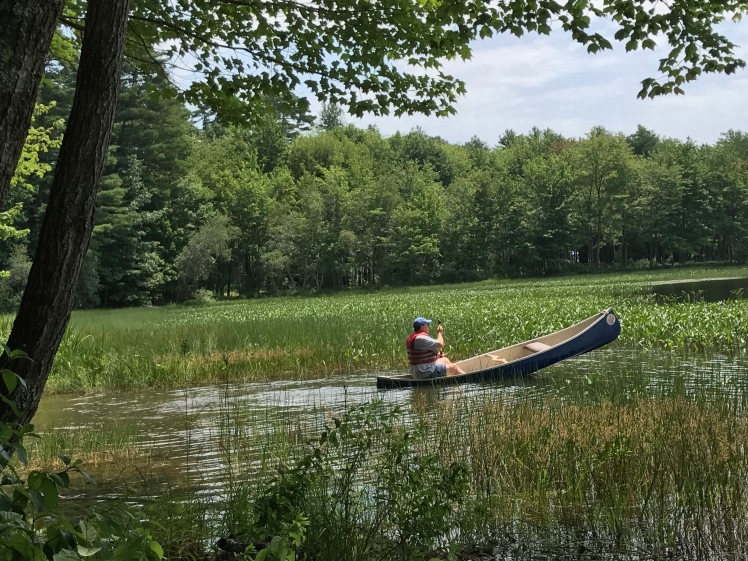 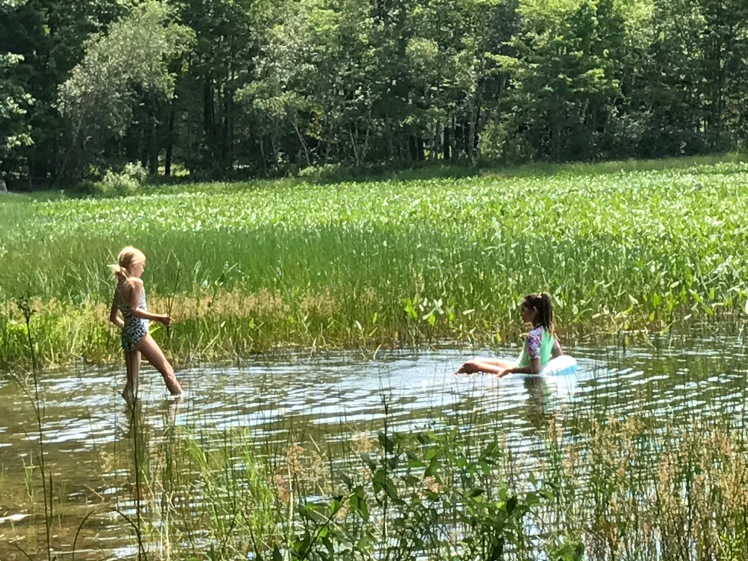 The girls spent a lot of time playing in the water together, as I "supervised" from my hammock.

Mike figured out the canoe thing. 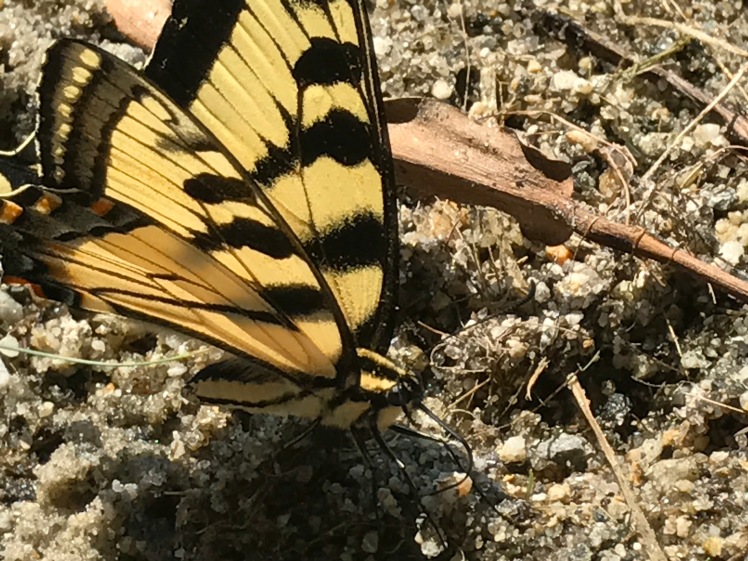 I was able to get close enough to the butterfly to take this photo. I didn't crop this photo at all.

One of the eagles (I think they were golden eagles, as even on the adults I didn't see the white head of a bald eagle, and these were full-grown nesting adults) near its nest in the tree in our yard.

Julie got some swimming lessons and improved her freestyle, and the best part was that the cabin came equipped with a full-sized washer and dryer. We are now over a month into our trip, and so far we've managed to avoid laundry mats completely (did laundry on the 4th of July at our cousins' house in Connecticut; then left the Maine cabin with all laundry clean; and as I'll note in another post, we did all of our laundry at my brother's house in Vermont yesterday). Maybe friends in Chicago will want to hook us up with free laundry as well?

Thanks for following along!